Can you ID the two girls dwarfed by the piled snow? Linked in to York County history, 3/26/13 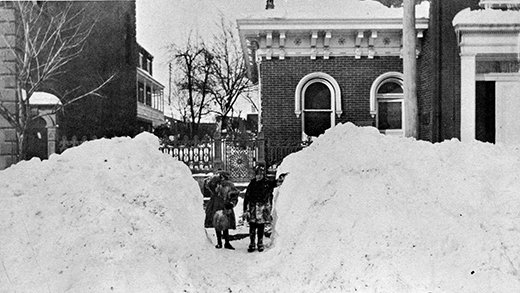 These unidentified girls probably never forgot this moment when the plowed and shoveled snow in York was almost twice their height in place. The location of this photograph, from York City’s 225th anniversary program, is also unknown. Can you locate it? For that matter, can you ID the girls? (Please comment below.) Also see another picture from that same storm below. That anniversary book, published in 1966, is available for viewing in the York County Heritage Trust Archives. Also of interest: Glen Rock storms: ‘I think the snows of years ago were much deeper’.

Did you know there’s an annual Palm Sunday walk along the streets of Spring Grove?

“The Bortner brothers have been leading the annual Palm Sunday processional down Main Street in Spring Grove for more years than most can remember,” a York Daily Record/Sunday News story states. “Ever since the first year, which organizers said they determined was more than 20 years ago.

Such examples of York County life provide the glue that hold our communities together.

Who is Auntie Anne? She’s Lancaster’s “Auntie Anne” Beiler of mall pretzel fame, and she’ll be at York College for a presentation soon.

Seeing the sites: York Sunday News columnist Gordon Freireich spent eight hours in tour time of Civil War sites in York County. Guide Scott Mingus had more to show but ran out of time. One could spend eight years and still not see all of York County’s Civil War sites.

A crowded place: Great. Gettysburg is going into gridlock this summer for Gettysburg 150 and now the borough is listed as the best small town to visit by the influential Smithsonian Magazine. 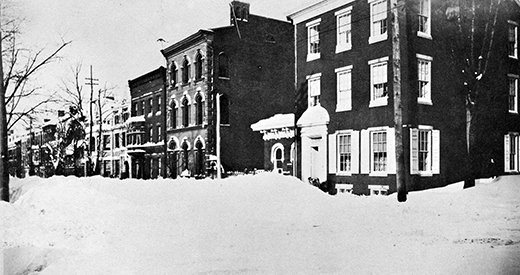 York citizens wouldn’t elect a mayor who let streets go unplowed like this.The 225th anniversary program is packed with photos such as these from the archives of the Heritage Trust, the National Archives and private collections. The booklet also has reproductions of primary documents.