Can you add to this list of veterans memorials from around York County? 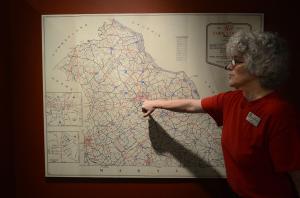 The York County Heritage Trust’s Lila Fourhman-Shaull shows a map of York County war and veterans memorials. The trust, www.yorkheritage.org and the York Daily Record/Sunday News bkessler@ydr.com are accepting additions or corrections to the map. A list of known veterans memorials is below, as well as a photo slide show of such memorials. Also of interest: War memorials stand proudly in towns throughout York County .

Tireless researcher Al Rose has developed a long list of veterans and war memorials around York County. But there’s one that has him stumped.

“The one that’s most puzzling to me, I think it was October 1944, Elmwood had planned a memorial and I know it was built and it stood at the entrance to Elmwood Boulevard (and East Market Street), but I don’t know what ever happened to it,” Rose said. “And I’ve been unable to find anybody who could give me any information about it.”

He made those remarks to the York Daily Record/Sunday News as part of this story: York County memorial map project gets boost from veteran.

According to the story:

Rose said the memorial was erected in the area of East Market Street and Second Avenue on the border of York City and Springettsbury Township.

“It would face toward East Market Street where everybody could see it,” he said.

Rose thinks the memorial was made of wood and deteriorated.

“I’d just love to find information on that one,” he said.

Here’s a bit more discussion on the missing marker on the yorktownsquare.com post: Mount Wolf’s war memorial located. But where is Elmwood’s roll of honor?

And here are the known markers, as compiled by the Heritage Trust. (Can you add to the list?):