Can the York Factory Whistle and Glen Rock Carolers harmonize their Christmas concerts with the same song? 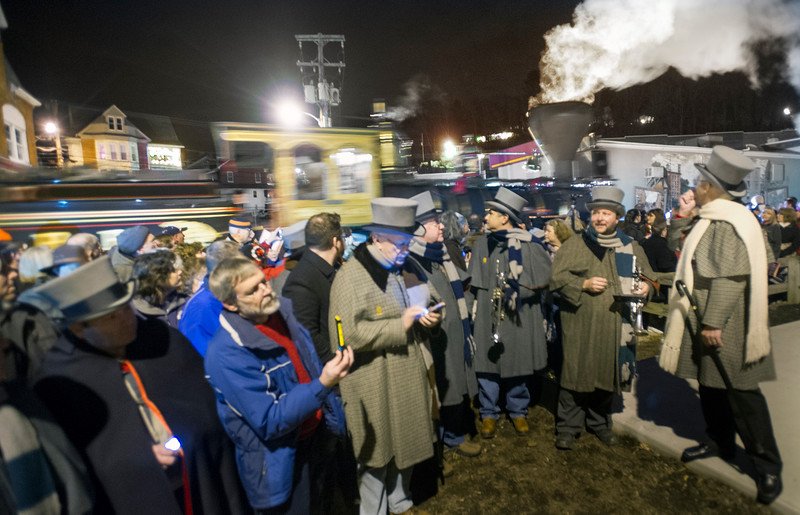 This York, Pa., Daily Record photo gallery has many compelling pictures of the Glen Rock Carolers in action. But I lingered on this one by the YDR’s Paul Kuehnel. It has all kinds of then-and-now and anachronistic characteristics. Men in top hats and capes using mobile devices. A train steam engine puffing away in the background as modern power lines rise above it all.  A town all lit up. The carolers completed another movable concert early Christmas morning this year, ending at a recently unveiled statue commemorating their vocal – and in some cases actual – ancestors. Also of interest: Books about Glen Rock abound, and there’s a lot of history to write about.

Both events pipe up just after midnight as Christmas Eve turns into Christmas Day.

And both have an opportunity to amplify their sound and magnify their performers to promote their calling and communities. 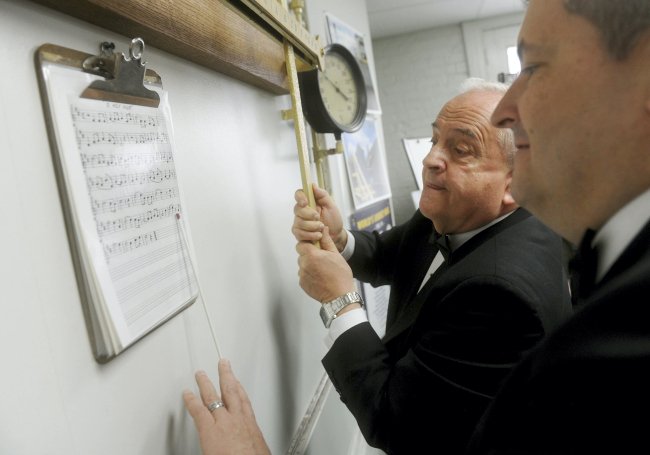 Whistlemaster Don Ryan rehearses several days before the big show, which takes place just after midnight on Christmas Day. Also of interest: Check out these stories and photos about York’s Factory Whistle.
+++

Remember those days when whistlemaster Don Ryan operated the York Factory Whistle in the narrow hallway at New York Wire?

Well, a different venue is just one of many changes in the Christmas morning factory whistle concert in recent years.

Here is a bit of that evolution:

And the whistlemaster has exchanged his frock-like garb and safety helmet for a tuxedo.

And in Glen Rock, the pre-Civil War caroling custom of a movable concert on this southern York County borough’s streets has received fresh legs.

Most recently, a  statue commemorating the first carolers was unveiled. The singers ended their all-night stroll in front of the statue this year.

And then there’s the presence of Steam into History, with its Civil War-era replica locomotive, adding much to before-the-event activities.

Steam locomotives were operating along the Northern Central Railway through Glen Rock when the five first carolers sang their first notes in 1848.

So how about if event organizers, in some way, combined forces early Christmas morning in 2015?

Maybe the start of the same first carol could be synchronized – or maybe, a tougher order, the entire first carol.

Both events have made international news by themselves.

Imagine what harmonizing a small piece of both concerts would do to bring the spotlight on these two communities and their quaint customs.

Both musical customs were spawned by working men.

The Glen Rock Carolers were millers and builders of York County’s third or fourth largest manufacturing town (after York and Hanover and along side Red Lion).

Factory whistles ordered York life in the Industrial Revolution and thereafter – signaling the start and stop of shifts and breaks.

So these two history-conscious communities about 15 miles apart and long connected by the railroad, and now the rail trail, have long breathed the same air.

Logistically, how would it work to synchronize the start of both concerts?

The performers could not hear each other, of course. Nor would they need to. The two would just start at the same time with the same musical piece and then go on with their traditional concerts.

Of course, with live streaming on desktop and mobile devices – introduced to the Factory Whistle Concert this year – those in each community could hear and see each other in real time.

This suggestion is much more than a marketing play.

It’s an opportunity for the York and Glen Rock communities to work together on a project.

These are two communities with histories of manufacturing that are transitioning in this service and information age, symbolized by the change in the old industrial Northern Central Railway into a rail trail and excursion train line.

For these customs to sustain themselves this long, they’ve had to adapt and change.

The synchronized start on the same carol would provide another chapter in the stories of these two Christmas events – a tale of resiliency and peace and goodwill between two communities with much in common. 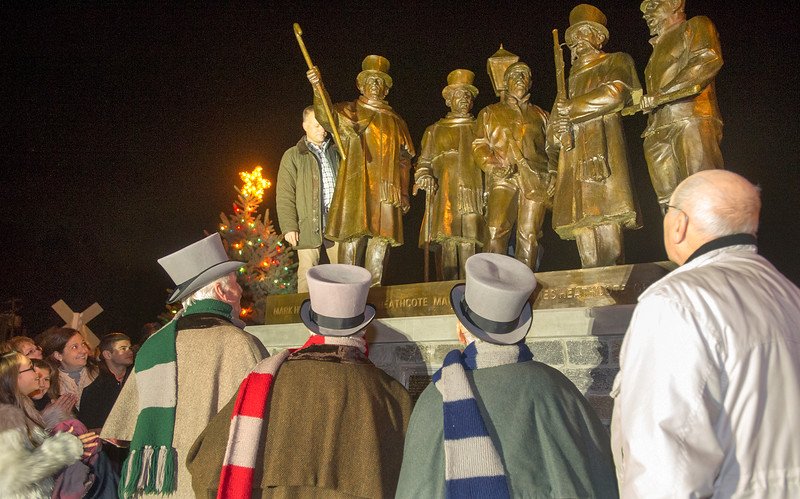 Longtime carolers and descendants of the original singers watch as this statue is unveiled just before Christmas in Glen Rock. Also of interest: Glen Rock Carolers make the BBC.

The Glen Rock community has demonstrated an ability to reach out to other communities for the common good.

For example, the Glen Rock Historic Preservation Society has been a major promoter of famed actor Cameron Mitchell’s connections to York County – and Mitchell grew up in Shrewsbury and went to high school in New Freedom.

The Carolers – a separate organization from the historical society but with common members – also has an outward orientation.

Members perform throughout York County, and its members have visited communities in Great Britain with musical kinship – and vice versa.