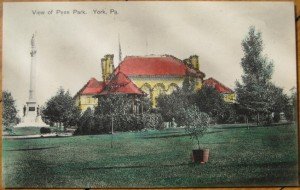 Penn Park will receive funds from the Department of Conservation and Natural Resources’ Keystone Fund and other sources. The funds will be directed to infrastructural improvements, but any aid to the once-grand and now relatively deserted York City park is welcomed. The park is slated to gain attention in future years from city park improvement programs. The city’s oldest park, site of a Civil War military hospital, was spotlighted when the Civil War Road Show stopped there in August. York Rotary/North recently asked me to present on the park, indicating ongoing community interest in park restoration. In fact, the organization discussed visiting the park in 2012. The question is out there: Can Penn Park become grand again? Here, York High, later Hannah Penn Junior High School, is seen from across Penn Park. The school is now a parking lot, but Soldiers and Sailors monument still rises from the park’s greenery. Also of interest: Saturday in Penn Park … People chatting, people laughing, playing Civil War songs.

Efforts are going on in the background to secure a grave marker for the unknown Confederate soldier along the Susquehanna River, north of Wrightsville.

Recent flooding destroyed the memorial that had stood on the site for years.The original stone could not be found.

“We’re going to work together to get that grave properly marked again,” said Ivan Frantz Jr., secretary/treasurer of the Capt. E. M. Ruhl, Camp No. 33 of the Sons of Union Veterans of the Civil War.

This quote came from a York Daily Record/Sunday News story on this campaign.

More from that story:

“Not much is known about the unknown soldier or his death. Frantz said the soldier was probably part of General J.B. Gordon’s brigade. Some accounts suggest the scout drowned while trying to cross the river and his body washed up on shore, said Scott Mingus Sr., a local Civil War historian.

“Perhaps the soldier was shot by a local resident who was afraid of the foraging Confederates, Frantz said. For fear of retribution, the resident could have dumped the body in the river upstream.

“The grave of the unknown soldier has been marked since the Civil War.”

Battle over staying open: The Gettysburg Battlefield is undergoing one of its periodic federal government funding battles. Fortunately, it won this fight.

Blogs posts of the day: Check out Universal York’s post about garden cemeteries  (and learn what they are in you don’t know) and Buffy’s World’s best of blogs for the week.

Forum of the day: Exchangers are discussing the end of the war in Iraq. 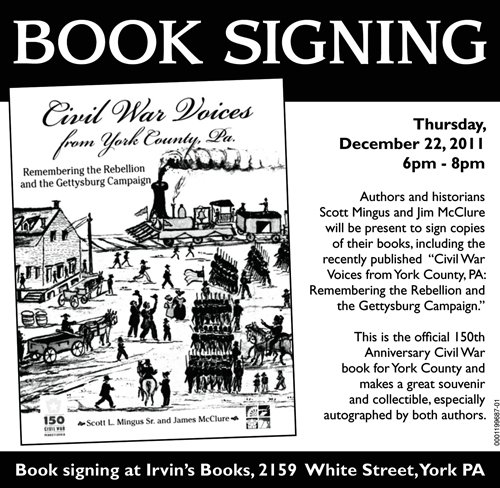