Can anyone ID these Scouts from York County in the photo? Linked in with neat history stuff, May 13, 2012 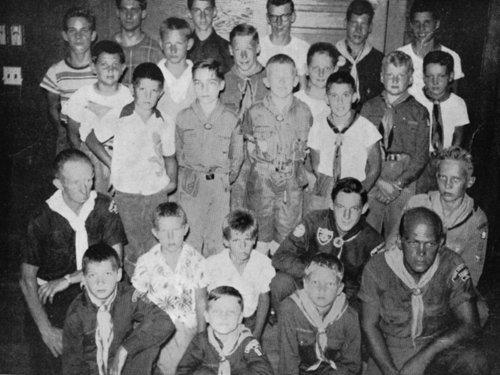 John Orendorff of York was on vacation in Maine when he ran across an item from York County – a Shrewsbury Lion’s Club calendar with is photo smack in its center. The calendar’s date, 1955, is easy to detect. Some of the advertisers on the calendar are still around: New Freedom’s Hartenstein and Co. furniture (or at least the funeral home part of that business), Glen Rock’s Glen Theatre (its partner theater in New Freedom is now closed), and Shrewsbury’s Joseph W. Silbaugh Monuments. But the Scouts in the photograph are not identified. Can anyone make an ID? Please comment below. Also of interest: Mason-Dixon Line hugging New Freedom playing host to museum and Don’t forget Rhodes Scholar and humanitarian Spurgeon Keeny of Shrewsbury on list of York County’s best and brightest.

Some weeks ago, Ruthe Craley asked York Town Square about a Mrs. Link, who performed with the Gettysburg College Orchestra years ago.

She pieced together an answer based on responses she received from the post and an article in the York Daily Record/Sunday News:

“She was Nellie Jane Motter and the maternal grandmother of Susan Kunkel Bogar from Napa, California. She was married to Harry Link, piano teacher and organist for Heidleberg Church as well as an organist for the silent movies.

“A number of people connected with each other through bits of information and I know that she was an ‘astounding contralto’ which was unusual because she was ‘petite.’ Not a Wagernarian apparently!

“Great fun to learn these things … .”

Live alone: Ed Kowalcyzk, former frontman for the York-born rock ban Live, will perform in York later this. So why put that on a history blog? Because today’s internationally known Yorkers will be cited in tomorrow’s history books. Check out how history treats dancer/performer John Durang.

Forum of the day: Man, the folks over at The Exchange are going nuts about the fluoride issue. A York County township has vote to stop fluoridation. People are made. I like implication of one response: Maybe we should stop vaccinations next. York Water Co. should have signed up 50 years ago along with mother county Lancaster.

Forum of the day, II: Beautiful York wants to know what you think about beautifying York’s Continental Square: http://bitly.com/KYUaUy Anything to tell them? If the square is spruced up, will you regularly go downtown? The Exchange  is fielding such question.