Can anyone ID the young woman in the picture? Linked in with neat York County history stuff, April 23, 2012 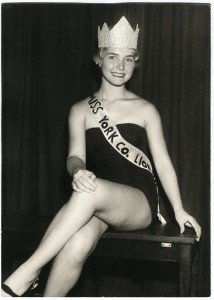 Tom Waters of Lively, Va., purchased this photograph on eBay recently. He’s looking to solve a history mystery. Who is this young woman? Can anyone help him? (Click to enlarge.) Here’s an inquiry that our readers helped solve: Monumental mystery solved: Wandering woman cemetery marker sits in Carlisle. And here’s one that may never be solved: Seven Gates of Hell: A history mystery of mythical proportions.

At yorktownsquare.com, we love to help people with an identity crisis.

Tom Waters, waters_tom@yahoo.com, for example, is looking for the identity of a woman in a picture.

‘Several days ago I purchased the enclosed photograph via eBay. As you can see it depicts a pretty girl who has won the “Miss York Co.” beauty pageant and was evidently sponsored by the Lions Club,’ he wrote. ‘ My best guess is that the event took place in the 1950’s or perhaps, the 1960’s.’

The name of Ray Wilhide Jr., a photographer from York RD3, is stamped on the back of the photograph. He passed away in 2007.

(Someone believes she lives in the Wrightsville-area today. Gary Dutery, journalist and longtime observer of York County pointed out the following on my Facebook page: “You can see the names of all the Miss York County winners from the 60s here: http://www.misspa.org/1960s_history.htm and by replacing 1960s with 1950s in the URL you get the previous decade. My guess is 1959.”)

Phillie pool closes: The pool where thousands of youngsters learned to swim has been closed for several month and will remain so. That’s the Phillie Pool at the York Y.

York’s own abolitionist: School teacher Thaddeus Stevens came to Pennsylvania and settled in York in the 1810s. The abolitionist later moved around southcentral Pennsylvania. Here’s a discussion on Stevens by Hanover Evening Sun editor Marc Charisse.

Want to buy a mansion? The Emig Mansion, that anchor on the north end of Emigsville, is for sale. See interior and exterior views in the York Daily Record/Sunday News spread: Emig Mansion in Manchester Township looks toward new chapter.

Famous authors: The writer of the Amelia Bedelia children’s book series is in York schools today. Did you know another author of the noted children’s publication “Weekly Reader” hatched the idea in York?

Forum of the day: Exchangers are having about the most complete conversation you can have on products made or once made in York. That discussion has been going on for months, and it’s a good one.

Forum of the day, II: Here’s an Exchange topic to weigh in on: Finding a way to heal: Red Lion school shooting still haunts some