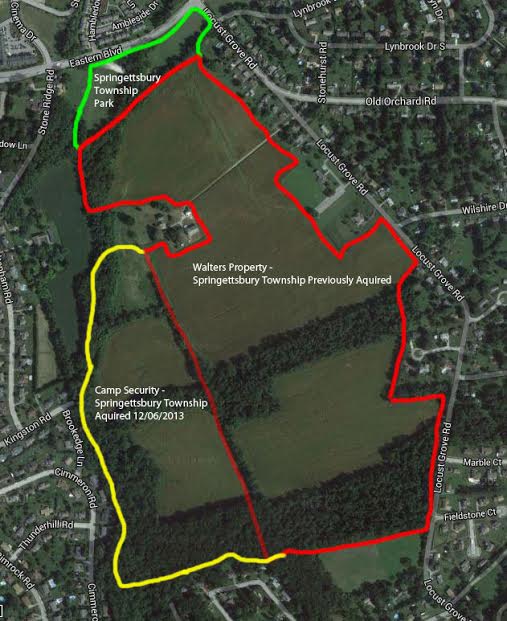 This aerial view gives an easy explanation of the various parcels that have been preserved from development so that Springettsbury Township’s Camp Security site can be explored and understood. Camp Security was a British prisoner-of-war camp in the American Revolution. Roughly 2,000 prisoners were detained on the site. Also of interest: York County’s British POW Camp Security was not that secure, drawing shows.

Some quick observations about the news that land on which Camp Security stood has been preserved:

– The work of the Friends of Camp Security and others who fought for its preservation is a textbook case of what a grass-roots preservation project should look like. No vitriol. Development of a base in which people of multiple incomes and interests contribute. Cultivate experts who supported the project with facts and artifacts.

– Preservationists played a card that is too seldom used by struggling non-profits. They brought in a celebrity with York County roots to help intensify the spotlight on the project. Noted author Rita Mae Brown visited here at a key moment in fundraising.

Not all historic land or buildings can be saved, but the Camp Security site merited preservation Preservation of prime sites is costly and difficult as this lengthy preservation battle attests.

The controversial preservation of Highpoint and parts of Lauxmont Farms, not far to the east, is another example of that.

Take together, York County’s quality of life has been elevated because these two wonderful pieces of land have been preserved.

The York Daily Record/Sunday News backed preservation of the Camp Security site since the land was threatened by development more than a decade ago. Here’s one example: Historic Preservation costs money.

All American Revolution posts from the start