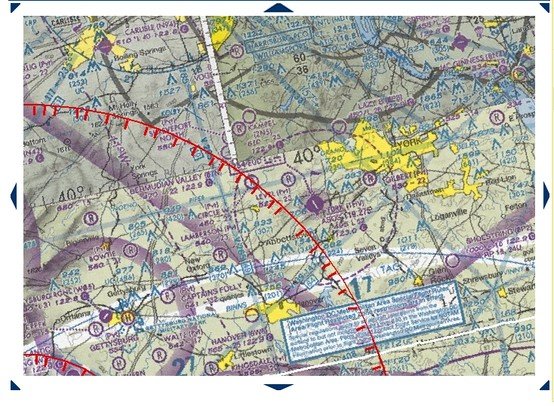 Scores of southwestern York County residents were looking to the skies Friday evenings as fighter jets scrambled after two planes entered into the no-fly zone around Camp David, site of the G8 Summit. This FAA restricted zone map shows that Camp David no-fly zone reaches the Hanover area (Hanover is the yellow zone just above the box.) All this serves as a reminder the proximity of Camp David, in the Maryland hills, to York County – about 30 highway miles from Hanover. This proves once again that York County is the center of the universe. This headline gives the resolution of the pilots who flew into hallowed air: Secret Service: Grounded Cessna planes were not a threat; no arrests made. For more on the Camp David no-fly zone, check out:   Protecting skies of Camp David, feds are trying to enforce an unseen barrier . Also of interest: Shuttle Stories show that York County is, indeed, in the center of the universe.

Mandy Dyson, trundlecat@googlemail.com, lives a long way away – in Barnsley in the United Kingdom.

But she has a question about York, Pa.:

“My Grandmother emigrated from here in the UK to the USA over 50 years ago aged 39 & I just discovered that she died in York, PA in 2001. I’m trying to find out a little bit more about her but as you can imagine, it’s proving difficult… . By all accounts she was quite a character so it might be a long shot but someone may remember her.”

Mandy did not include her name, but there might be enough information here for someone to help.

Fullback family: Frank Bodani updated the NFL fortunes of the trio of brothers from Redlands High School, the Cox family. One member of the Fullback Family even has a young one, no doubt a future fullback.

Downtown Menges Mills: The store in the village near Spring Grove where Richard Nixon and his parents shopped when his parents lived in Heidelberg Township? The Menges Mills Market has new owners.

Blog post of the day: At yorktownsquare.com, we love aerial photos. June Lloyd does, too, over at Universal work. See this bird’s-eye view of the Horn Farm in Hellam Township.

Forum of the day: Exchangers are discussing York’s famous music groups and band.

Learn why a Paradise Township man has a pink tractor.