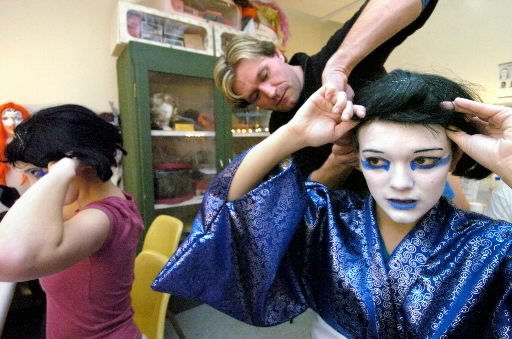 This is prep time for a dress rehearsal for ‘The Lion, the Witch and the Wardrobe’ at York, Pa., Little Theatre in 2006. This performance put an different twist on C.S. Lewis’ famous series. Lewis is known to many in York County because of this story. Also of interest: Civil War Easters 1861 & 1865: Hope for the world is constant in past and present wars.

The 50th anniversary of British scholar and writer C.S. Lewis’ death was overshadowed by that of an even better-known world figure: John F. Kennedy.

Lewis’ writings have influenced millions, so some, indeed, noticed the anniversary last November. Christians and non-Christians of all political and theological stripes have enjoyed his work.

Lewis’ life and writings are intriguing for what they point to on Easter, the day Christians around the world mark as a major anniversary: the resurrection of Jesus just days after his death on the cross.

Christians around York County have been participating in Holy Week activities culminating in today’s services.

And a cast of 60 performed a two-act play modernizing the story of Jesus’ life and death at William Penn Senior High School. Jesus was played by a Hispanic man, a white man and a black man in this production, “Cemetery Celebration.”

Out in the Dover area, Lower Windsor Township’s David Bubb painted a mural, designed for children, showing the biblical story of Noah. It was a coincidence that Noah went up on a wall at Harmony Grove Community Church as the same time that the Russell Crowe movie came out. But it’s up in time for Easter.

Easter, indeed, is a major event around York County.

C.S. Lewis is known well around York County. Theater groups, for example, have based performances on his book, “The Lion, the Witch and the Wardrobe.”

Writer Max Lucado tells a revealing story about the ever-popular Lewis, an agnostic until his adult years:

Lewis spent time with another scholar, T.D. Weldon, a cynic who Lewis wrote “believes that he has seen through everything and lives at rock bottom.”

Weldon, as it turns out, was studying a theologian’s defense of the four Gospels in the Bible that tell about Jesus coming to earth for the benefit of humanity and then dying a martyr’s death on the cross.

“Rum thing, that stuff of a Dying God. It almost looks as if it really happened,” Weldon commented.

Was Weldon drunk? Lewis thought. But the cynic’s statement contributed to Lewis’ probe into the claims that Jesus was God. And Lewis became one who believed it “really happened,” gaining a worldwide audience for his spiritual insight.

As Lucado noted, the Weldon/Lewis relationship was akin to the thief on the cross who noticed the sign written cynically by Roman Governor Pontius Pilate attesting to Jesus’ kingship nailed above Christ’s head. The thief asked Jesus to remember him after death.

So Lewis would live to pay this hope forward.

His BBC broadcasts during World War II provide just one example. The British radio shows, which came at a time when Britain was facing the terror of persistent bombings from German aircraft, brought hope to listeners.

“The war, the whole of life, everything tended to seem pointless,” British officer Sir Donald Hardman wrote, as found in Derick Bingham’s “The Storyteller.”  “We needed, many of us, a key to the meaning of the universe. Lewis provided just that.” 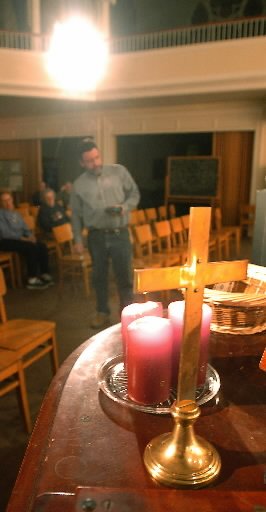 ‘The Lion, the Witch and the Wardrobe,’ based on the series by C.S. Lewis, plays at a service at Heidelberg United Church of Christ in York in 2006.