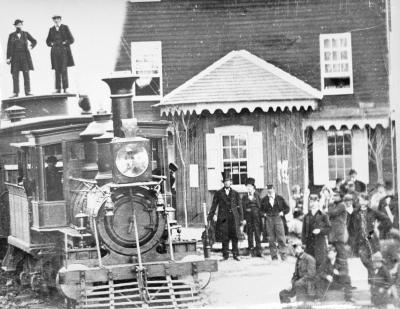 This is one of York County, Pa.’s most enduring controversies. Is that Abraham Lincoln wearing the stovepipe hat in the center of this photo? The president changed trains on his way to and from Gettysburg, which means he would have have been available for this photo op.  But some contemporary observers believe the man below the top hat is Hanover Branch railroader A.W. Eichelberger. As is the case here, Abe’s relationship with York County is often out of synch. Also of interest: Living historian to recreate Abe Lincoln’s trip to Gettysburg via Hanover Junction.

For much of the buildup to the Civil War as well as the conflict itself, York countians had problems lining up with Abraham Lincoln.

York County voters cast more votes for his opponents than for Abe in 1860. And to make sure the majority’s dislike for his policies was not misunderstood, they voted for Democrat challenger George McClellan by a wider margin over Lincoln in 1864.

Lincoln did not help his own popularity with York County by failing to show for a scheduled train stop in early 1861. He was on his way to the White House, and his train, with family, indeed stopped in York.

But for safety reasons, he had already traveled a different route and slipped through Baltimore where danger reportedly loomed.

In 1863, he made it to York County on his way to and from Gettysburg where he gave what became known as the Gettysburg Address.

Author Bradley Hoch writes that Lincoln was quiet and joined sparingly in conversations in Hanover Junction on his return trip.

So Lincoln wasn’t feeling well – he had a mild case of smallpox – on his only known visit to York County. And he potentially passed on the illness to those he engaged with.

In its own report, the Gazette was a bit more charitable but did not recognize the speech’s significance – albeit common for that time.

An oft-repeated claim is that Lincoln worked on his speech while rolling in his train car through York County. Gabor Boritt of Gettysburg College and other scholars maintain that he started his 272-word address in Washington, D.C., and wrapped it up in the Wills House in Gettysburg.

Fortunately, York County rallied and honored the slain president in 1865 when his funeral train stopped in York. Leading women in town laid flowers in the car where his body lay.

Outside, within earshot of a Philadelphia Inquirer reporter, an elderly black man proclaimed, “He was crucified for us.”

It took 5 years of interaction with Lincoln, but York County finally got it right.

All Abe Lincoln was in York/Adams stories and photos from the start.
Also:
York newspaper about Gettysburg Address: ‘Mr. Lincoln made a joke or two …’, Historical marker may soon point to Jefferson square’s famous visitors and Abandoned Codorus railroad not just any abandoned railroad.