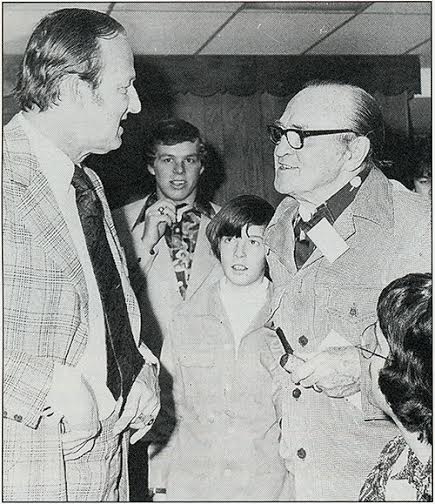 Stan Musial, left, and Hinkey Haines talk at York Sports Night in 1976. Haines was inducted in the York Sports Hall of Fame that night. Butch Wynegar, background, holds a pen, anticipating an autograph in this photo from James C. Hubley’s collection. Also of interest: Hinkey and the Babe teamed up in 1923.

‘York native Butch Wynegar is back in pinstripes.’
That’s how the YDR’s story on Red Lion-native and 13-year major-league veteran Butch Wynegar began. See Butch. It went on to explain that the recently released hitting coach for the Milwaukee Brewers was now a hitting instructor in the Yankees organization.
Anytime I read about Wynegar, I think about this photo bringing together three generations of baseball greats – Stan Musial, Hinkey Haines and young Wynegar… .

Haines played on championship teams in two different sports – for the Yankees and New York Giants. Later, he played baseball for the York White Roses, antecedent of York’s new team, The Revolution. See more on Hinkey.
This photograph comes from veteran York journalist Jim Hubley’s “Off the Record.”
It is dated 1976, just months before Wynegar made his major league debut with the Twins, playing in the All-Star game that year.
Hard to believe it will soon be 31 years since Wynegar played in the Major League All-Star game.
Some additional facts about the York-born Wynegar, according to the YDR (and see even more at Lineupcard :
· He was drafted by the Minnesota Twins in the second round of the 1974 amateur draft.
· He made his major-league debut with the Twins on April 9, 1976.
· He was named to the 1976 American League All-Star team as a rookie. At 20 years and 4 months old, he became the youngest player (at the time) to appear in an All-Star game. He played in the 1977 game, too.
· He caught New York Yankee Dave Righetti’s no-hitter on July 4, 1983.
· He caught Phil Niekro’s 300th victory on Oct. 6, 1985.