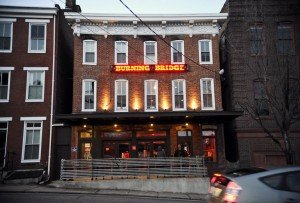 The Burning Bridge Tavern in Wrightsville is named after the nearby bridge that the Union Army burned to keep invading Confederates from crossing in the Civil War. The building, a longtime tavern, sustained its own fire in 2008. It was then renovated and reopened about a year ago. An interesting piece of this story is that not many buildings in York County are named after Civil War events or figures, even though the Civil War was a major moment in York County’s history. Another reason this is featured today: I just love the photograph. It shows new life – and investment – in an old town. For more on the tavern, check out: York County Tavern Tour. Also of interest: Check out this list of York County’s 10 most memorable Civil War moments.

York countians might remember Steve McKee, who so thoughtfully wrote about growing up in York in his nationally circulated book: ‘My Father’s Heart, A Son’s Story.’

“Since September I have been blogging at www.centaurseasons.com. The Centaur was the mascot of brand-new Allentown College of St. Francis de Sales, which I attended in the early 70s. I also played basketball; the program had two varsity years under its belt when I arrived.

Here, in order, are the blog posts that specifically tell my story, coming from York to this college and team that not so coincidentally got pummeled twice each year by York College. (if you do take the time to read these, you’ll see that they do tell a story, one to the next….)

– Allentown getting trounced by York in the two years before I got there and then again my first year: Allentown.

– My freshman year on the team (and I was AWFUL): Basketball.

Check out Steve’s website and take a look at another post on yorktownsquare.com in which Steve appears: Back when Gino’s was the York-area place to go and Baltimore Colts was the team to root for.

Forum of the day:  After an important day on Monday, Exchangers are discussing Inauguration  Day and MLK. The thread also contains a video of Martin Luther King Jr.’s ‘I have a Dream Speech.”

This rendering shows Springettsbury Township’s proposed new fire hall. It will replace the current building along the Lincoln Highway, a prime meeting place for years in that highly populated area. Gordon Freireich wrote about fire halls, old and new, in his York Sunday News column on Jan. 20. Freireich reports the current fire hall, a 1958 structure, will come down and be replaced by a strip shopping center and a building for another store.