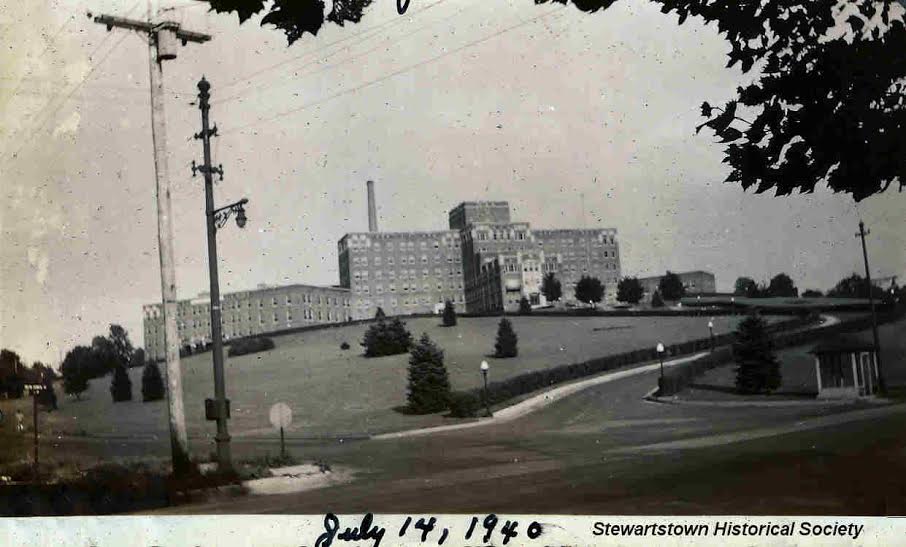 This hill has grown up since this photograph of the 10-year-old York Hospital was made. Today, some buildings that went up on the hill have already come down to accommodate new growth of this major York County employer and regional trauma center. York Hospital opened on this hill south of York in 1930 after a 50-year run on College Avenue in the city. Interestingly, the hospital’s decision to locate in the then-remote south end 85 years ago has ramifications for York City today.  A 2011 York, Pa., Daily Record story explores the lack of proximity of York Hospital and York College to downtown York. It makes a comparison with Lancaster and that city’s closer geographical relationship to Franklin & Marshall and Lancaster Hospital. Researchers writing in the 2011 Journal of York County Heritage surmised that the location choice came because it was on a hilltop in a less-populated area. Before air conditioning, they said, hospitals were built so that prevailing winds could cool and keep the air ‘pure.’ The thinking at the time, they said, was that ‘germs’ could be removed by the moving air. Doug Winemiller of Stewartstown Historical Society shared this photo from that group’s files. Also of interest: Check out this aerial view of the sprawling York Hospital.

What year did Rutter’s build its story in Manchester, and what stood on the site before their store went up?

I told him that I would request that his query go on the always helpful Manchester/Mount Wolf Facebook page (and it did with lots of response).

I also pointed him to the Manchester Township Historical Society.

So here’s hoping Ivan gets his answer. If you can help, please comment below.
+++
Lincoln in bronze: All 12 feet of him … .

The Heritage Trust’s new home? Could be, but now exploration is underway about funding … .

The option being pursued by the York County Heritage Trust would incorporate the former Met-Ed Steam Plant building, which it would have to purchase, at Pershing and Philadelphia streets.

+++
Journal of York County Heritage: The 2015 edition, coming out in September. should be insightful, informative. Are you working on a submission for 2016? … .

History Mystery: The William C. Goodridge building, seen here with with the skylights, was the tallest in #YorkPa in its…