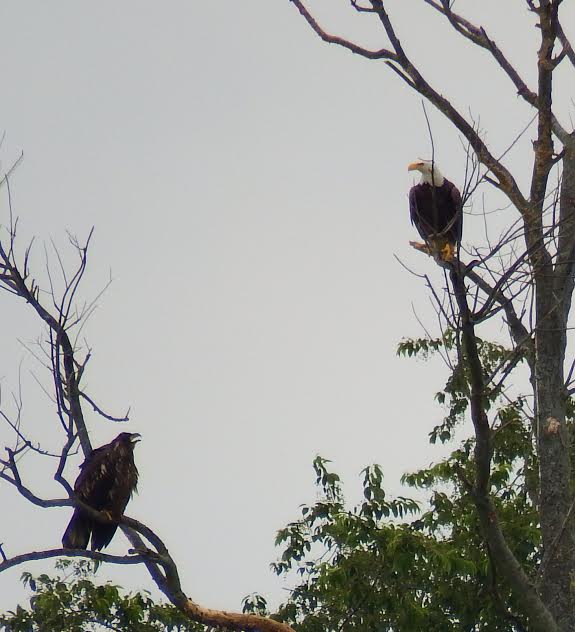 This is a fitting way to recognize July 4: Readers should know about the ending of the Eagles Cam that captivated at least 1.5 million people for the past five months or so. The cam is now down. The Pennsylvania Game Commission’s camera captured nesting eagles, the hatching of their eggs and the development of the eaglets into fledglings. So today, we have this wonderful photograph from reader Carolyn Boose and an engaging Hanover Evening Sun story with a great summarizing headline: From Founding Fathers to Hanover-area Facebook users, Americans love eagles. The photo shows one of the two Codorus State Park fledglings, left, with one of its parents. Here’s a fitting quote from The Evening Sun story: ‘The Founding Fathers made an appropriate choice when they selected the bald eagle as the emblem of the nation,’ John F. Kennedy wrote. ‘The fierce beauty and proud independence of this great bird aptly symbolizes the strength and freedom of America.’ If you want to catch up or revel in some nostalgia, check out these stories and photos about the Codorus Eagles. Also of interest, another accessible eagles nest: York County’s rail trail eagles: ‘This pair of eagles doesn’t seem to be bothered by anything’.

This sampling of Facebook posts below, unrelated to the eagles, cover a lot of historical ground. Click on the date if the image doesn’t appear on your mobile device.

Stay tuned: The York County Heritage Trust is publishing Scott Mingus’ important work on the Underground Railroad in York County and this region. It’s due out early in 2016. I’m honored to be part of the team editing this certain-to-be-popular work.

I am so very pleased. Today I submitted my 100,000+ word manuscript on the Underground Railroad in York County to the…

+++
Just interesting: I found this intriguing, and it’s always important to keep track of history happening outside of York County’s borders.

Posted by Pennsylvania Trails of History on Friday, July 3, 2015

I know you all know Bricker’s French Fries. Or do you? Do you know many lbs. of potatoes do they bring in every week?…

History Mystery: An appropriate quiz on the 4th of July

History Mystery: This marker points to trees planted to honor those who died in uniform in the Great War, WWI, from…