Building No. 11 in Springettsbury Township. What was it then and what is it now?

This aerial view shows the York County Shopping Center in the late 1950s. Check out building No. 11, still standing today. What was it built for originally? And what is it used for now? For a key to the identity of all the buildings, see: Just try to resist studying this memory-tugging Sears photograph. (See another aerial view and a contemporary view of its interior below). Background posts: Before Geno’s made news in Philly, Gino’s headlined in York, Bury’s memories far from buried and Sears, York County Shopping Center in the middle of things. 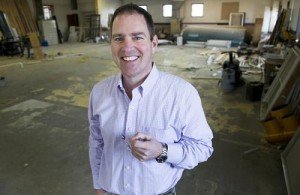 “This building is part of York County history,” he said. “I feel like I’ve been assigned as a caretaker of history.”

This photograph from a mid-20th-century York Chamber of Commerce publication shows York Valley Airways, later York Whitehull Airport. The old Valley Canvas building, then part of the airport at left, stands today. For the story explaining this photograph, see: Early York airport operator: ‘My planes will be new and with mufflers to silence them’