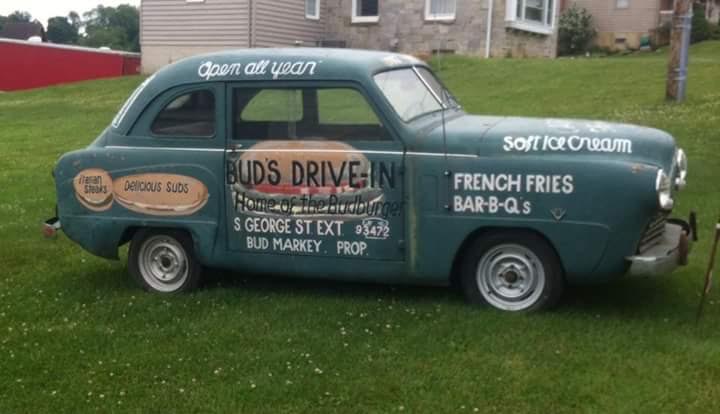 The York, Pa., Daily Record’s Paul Kuehnel spotted this 1940s Crosley at the 2400 block of South George Street, downhill from Joppa Road on the left. But what about Bud’s Drive-In? Joan Concilio’s Only in York County blog is the go-to place for answers about old eateries around York County, Pa. And her readers placed the restaurant along that stretch of South George Street. A distinctive about the eatery? You ordered your meal via telephone from your table. Greg Halpin, a student of local history, recalled: ‘You never saw a server at your table until you placed your order. They also had these small, round deep fried dinner rolls that I’m sure were cholesterol laden, but who knew back then … they were delicious!’ Joan’s story also told more of the story courtesy of Gregg Markey, son of Bud, who installed the red phones in booths with his father. Bud owned the restaurant from 1958 to 1974 and then went on the manage Elby’s on Memory Lane (now Round the Clock Diner East) and a restaurant in Longstown (now Meadow Hill). So the Crosley auto is left behind to remind motorists of a once-popular place. A bit more about Bud’s Crosley from Mike Argento. Also of interest: All about the Shady Dell, another eatery off South George Street.

Other unrelated  photos and stories stuff from all over … .

Now and then, an old story rises into the most-viewed list on YDR.com. Sometimes, it’s hard to figure why. But we’re glad in this case that the again-popular story tells the world about a hero with York County ties, Neil Roberts.

Roberts, buried in Prospect Hill Cemetery, lost his life in a shootout with al-Qaida on a snowy mountaintop in Afghanistan in 2002.

He was the first fighting man with York County ties to die in the War Against Terror.

These are the wings of the an old experimental aircraft, the Guppy, set to be auctioned by Chris Mudd. Mudd operates Office Furniture Today on Northern Way in Springettsbury Township and is auctioning some of the aviation memorabilia from his business, which operates in a former hanger. Mike Argento told about the Guppy, the auction and the old airport in a recent story: ‘Before it was Valley Canvas, the building was the hangar for the former York Valley Airpark. The airport, on the site now occupied by Wal-Mart and Buffalo Wild Wings, among others, operated between 1948 and 1952.’ Check out: Auction leads to Dapper Dan, aviation pioneer and friend of Charles Lindbergh.
+++
Learn how to get your information and photos published  in the Weekly and York Daily Record at a free seminar on June 18 from 3:30 to 5 p.m. in the Daily Record office at 1891 Loucks Road, in West Manchester Township.

YDR editors will be there to answer your questions and provide easy-to-follow guidance to submitting your news. 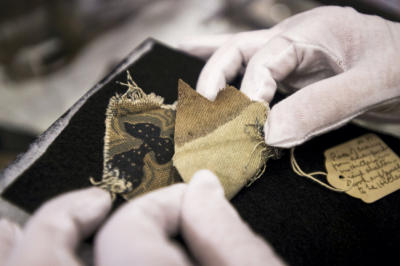 This piece of fabric from Hitler’s couch shows a blood stain. A Gettysburg museum curator hopes that DNA testing will tell more about this artifact. Check out: Museum of History in Gettysburg.
+++
History Mystery: Today, a bit of a steeple chase… .

History Mystery: A few years ago, this worker was rehabbing a 142-foot-tall #York / #Adams church steeple. It was a…