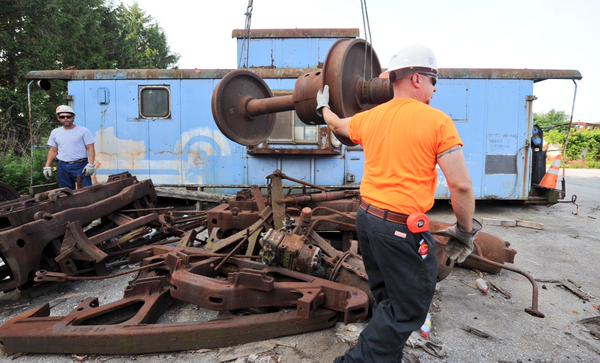 Crews prepare to move the old Conrail caboose stored near Dallastown to the Red Lion train station. The late-1940s or early 1950s cab has been sitting in Markey Trucking’s yard since 2009. It’s not in good condition and needs a good sandblasting, a Red Lion Historical Society member told the York, Pa., Daily Record. And yes, it will be painted red, as in Red Lion. (See additional photos below). Also of interest:  Blue caboose in Red Lion? ‘Yes sir – it’s gonna be red.’

Moving a caboose from Dallastown to Red Lion. One piece at a time. Updates @ydrcom @teresaboeckel pic.twitter.com/YRzFgar2Ju

A second big piece of equipment is moving through York County today on its way to Glatfelter in Spring Grove. (Click on the photos, above, to make larger).

Ever wonder what’s inside those boathouses along the Schuykill River as you enter Philadelphia? The website BillyPenn.com posted several photographs with a story to show you.

Anna Orso was the writer of this piece. She is a Central York High School and Penn State grad.

Well-known York County history writer Georg Sheets has a book coming out in October from Arcadia Publishing. It’s called ‘York.’ Here’s a description from Arcadia: ‘York experienced great changes following World War II. People began moving from the city to the suburbs, and many department stores, like Bear’s, Wiest’s, Jack’s, and Gregory’s, closed. Long-standing companies such as AMF and York Air Conditioning were sold or moved, while banks, industries, and businesses merged. The York County Shopping Center opened on the East End, attracting customers who had formerly shopped downtown. WSBA TV went on the air in 1952, starting a new era in communication and a business empire that still has a strong presence today. The band Live grew from a group of local high school students to well-known musicians that graced the cover of Rolling Stone. Jeff Koons became one of the most celebrated artists in the world, Kim Bracey became the first African American mayor, and York businessman Tom Wolf became governor. York continues to celebrate its rich heritage as the “Factory Capital of the World.” ‘

At the York train station: The dig underneath

Some of the artifacts found in the basement of the 1890s-vintage York train station -nails, pieces of pipe, broken ceramic and an oyster shell. The surface soil is shallow so anthropologist Ben Luley doesn’t believe they’ll find much more. Frank Countess, who owns the old Northern Central Railway Station wants to renovate the building back to its original look, according to the York, Pa., Daily Record. Here’s a photo gallery from the dig.

History Mystery: Bet many of you recognize this place … .

History Mystery: This is the place to go for folks – from home here in #YorkPa and around the world – to research their…