Replicating Lincoln in Gettysburg: A Red Lion artist is working to reproduce ‘The Man’ 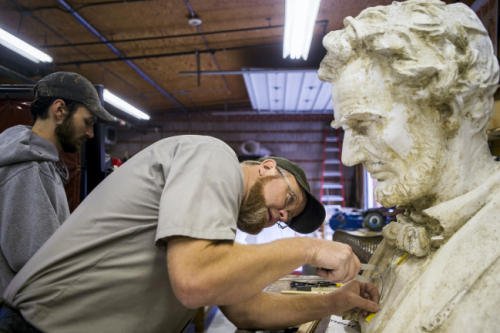 Brian Griffin is a Red Lion, seen here, is an exhibit specialist for the National Park Service, another important artist with York County, Pa., ties. The county has produced artists with national reputations since the early 1800s. Brian Griffin has done metal restoration at the White House and historic sites across America. According to The Evening Sun in Hanover: His big current project is to restore hollow casts, made of plaster and burlap, that were made for a replica of Augustus Saint-Gaudens’ ‘Abraham Lincoln: The Man.‘ That 12-foot-tall bronze statue stands in Lincoln Park in Chicago. Those casts that Griffin is restoring? Well, President Lyndon Johnson wanted to give a replica of the 19th-century statue from the famed American Saint-Gaudens to Mexico. That never happened and the casts have been sitting in storage since the 1960s. Now Griffin is others are working in Gettysburg to produce the replica for the Saint-Gaudens National Historic site in New Hampshire late September. ‘We’re just the current generation maintaining this history for the next,’ he said. ‘You feel a lot of pride in that. These are all national treasures.’ Also of interest: Another example of a statue restoration in Gettysburg after vandals struck.

The York County Planning Commission is working hard on a Historic Preservation Plan.

Here’s an excerpt from a recent York Daily Record story about a survey connected with this work:

“One respondent described York County as having ‘a unique blend of historic and culturally important features. Not only do we have a long architectural history, but we also have a unique historical landscape that needs to be developed.’ ”

“The writer was not alone in feeling the county stands out.

“More than half of respondents — 59 percent — felt that York County is unique.

“A total of 345 respondents wrote a short answer on why they felt that way. Those responses emphasized value in the county’s countryside and farmland; trails, waterways and natural areas; and local parks and public spaces” 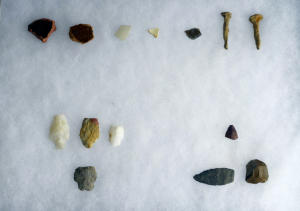 These are some of the artifacts collected at the presumed Camp Security site, the British prisoner-of-war camp in the American Revolution.  The historic items from the colonial period, top row, included a pieces of tea cup, creamware, and English flint. The York Daily Record reports that the Springettsbury Township summer of 2015 dig, which is winding down, has not provided much-sought-after evidence of the stockade that stood on the grounds.

History Mystery: Can you place this telling scene?

History Mystery: This building opened a bit more than 10 years ago, but this floor, middle, is just new. It’s another…