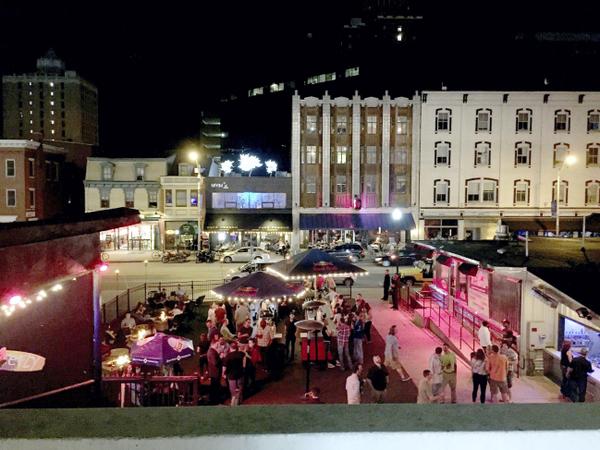 Harrisburg, Pennsylvania’s capital city, is busy at night in this scene. York’s recent downtown story intersects and runs parallel with Harrisburg’s. About a decade ago, York was betting on nightclubs to spawn rebirth to replace the loss of retail and other initiatives. That had worked in Harrisburg, and York’s leaders hoped for similar results. Well, nightclubs didn’t work in York, and actually, the nightclub phase has moved through Harrisburg, too, as this FlipSidePa.com story indicates. Now it’s a place for eateries, music and casual stuff. ‘It has become more attractive now for date night — young professionals going out for an evening for drinks and entertainment. We’re seeing more emphasis on the dining experiences and the variety of experiences that you can have along Second Street, still fun, still great nightlife, but not every other door is a nightclub,’ a visitors bureau official told FlipSide. You’re seeing some of that in York, too.  It’s interesting to track changes in any downtown, and it might make sense to keep an eye on Harrisburg’s transition. York seems to be following the same path with Royal Square Development  and other investors putting up their money everywhere. Given some of the good things going on in York, maybe Harrisburg could learn some things by looking this way, too. Also of interest:  Emailer links Roosevelt Avenue Airport, Downtown York Bon-Ton – and Santa.

Now the North Beaver Street Bridge in York is going to be named after him.

Here is his John Henry Denig’s story.
+++
In Blair County: Ever been to Lakemont?

Change along the Susquehanna: This landmark gaining new look

Are you worried that a landfill expansion on the Lancaster side of the Susquehanna River will affect York County tourism?

History Mystery: The interior of this old #YorkCountyPa building is original and one of a kind. In fact, it’s just been…