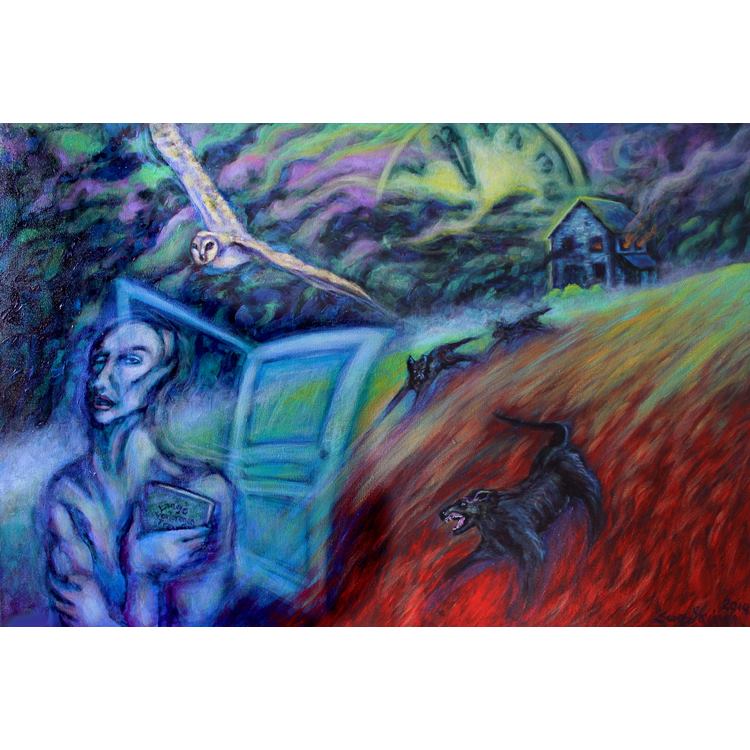 York County’s Brett Greiman painted this scene of the Hex Murder of 1928 – a terrible moment in which a trio attacked and killed a farmer, a suspected witch, in an attempt to break a spell they believe he had cast on one of them. Also of interest: Check out these stories and photos about the Hex Murder and trials of 1928-29.

After I shared a post on my Facebook page showing the Hex Murder house in southern York County, well-known artist Brett Greiman noted that he had painted a scene of the night of the crime.

“A few months ago, I completed a surrealistic and rather disturbing painting about what happened here. Titled ‘Die Totung Der Hexenmeister,'” he wrote. That is translated: “The Killing Of The Hexenmeister.”

Disturbing moment was right, as I wrote in my reply:

“Too often, this terrible moment is trivialized. It was a ‘rather disturbing’ moment, as you portrayed. I get into that a bit here: Terrible Hex Murder of 1928, associated with Halloween, actually happened at Thanksgiving.

Brett came back with a bit of context:

“I did much research on this before starting the painting including visiting & photographing the site several miles east of Glen Rock. Also, accessed some of your research into the murder. I heard about this from my early childhood since my mom, who was in her early teens at the time, had taken horseback riding lessons from Curry.”

Brett’s work effectively underscores the brutal crime in which an innocent man was killed. Those facts have been obscured by the passing of time, the youth of the assailants, the matter that the assailants became known in the community after their release from prison and other factors.

Background about the painting:

“York Art Association had scheduled a gallery show titled ‘Local Color’ for late summer 2014. It was to be artworks inspired by places within the tri-county area. I wanted to create a painting for this but one that would go well beyond what people would expect from me. Maybe rather than a painting of one of York County’s beautiful areas, perhaps instead a place of notoriety. One that would also challenge me to break out of what I usually paint. Beginning in May, I started my research on the Hex murder, visiting and photographing Rehmeyer’s Hollow, conducting on-line research, and even purchasing a copy of “Long Lost Friend”. I then worked on many thumbnail sketches so that I could be sure my composition was both effective and unsettling. This would be a surrealist painting. A type of painting I rarely create.”

J. Ross McGinnis, who wrote the authoritative “Trials of Hex,” helps make sense of the Hex Murder and explains the basics of the crime.