Boy hopping a train turns into tragedy in 1886, the saddest of many Seven Valleys train accidents 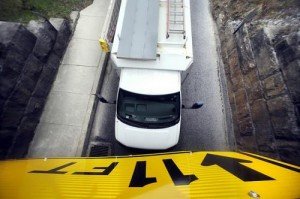 This truck made it through but the bridge carrying the York County Heritage Rail Trail, and before that the railroad to Baltimore, has caught the tops of trucks. See a photo of a truck that didn’t make it through below. For years, railroad accidents have been common in this southern York County borough. Also of interest: · Baltimore screamed for York County ice cream.

The Northern Central Railway was a lifeblood of commerce for York and the farming communities along its way since it linked them with Baltimore in1838.

But it and its successors have been causing problems, even death, for residents of Seven Valleys and other rail towns, as well.

The Great Watermelon Train accident of 1918, a collision of two fruit trains, is the highest profile wreck on the rail line in the Seven Valleys area. At least, no one was killed in that crash.

A lesser-known, but deadly accident shocked local residents in 1886. An account in my “Never to Be Forgotten,” tells about the dangers of railroading, that as current news stories suggest, continue to this day:

“Hopping freight trains, a time-honored county sport, ends in disaster as a 10-year-old dies a painful death. Harry Hall misses a ladder and falls beneath the wheels of a freight train as it moves through Seven Valleys. The wheels sever his legs at the knee. He suffers for four hours before he dies, begging townspeople to kill him because of the pain. The dangerous trains were a constant concern of parents in the county’s many railroad towns. Hopping the freight died as a sport as locomotives became faster. One historian said Bob Kuntz, the champion hopper in Seven Valleys, could catch a 30-mile-per-hour train. At this speed, his body flattened out along the side of the box car with a loud crash, but he held on, much to the delight and admiration of the younger boys. Newspapers regularly tell stories of fatal encounters between humans and trains. In 1867, for example, a coal train ran over a track watchman named Joseph Walker near Emigsville. Walker either was sleeping on the tracks or was not aware of the train’s approach because he was hard-of-hearing.” 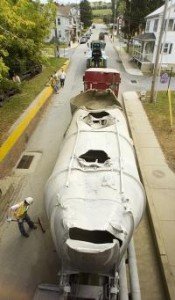 This truck became stuck in Seven Valleys on Sept 9, 2010.

– A story about Seven Valleys – From rail to rail trail

– Ma & Pa Railroad Locomotive No. 2 lost by a landslide in York Township

– ‘Rocks in the Glen’ turns into town where things happen 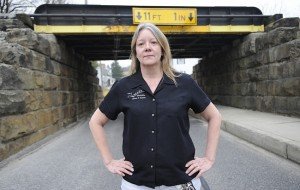