Owner wants to know more about his property on Dover, Pa., square

Ron Botterbusch left the American chestnut beams, right, exposed in his Dover home. He has operated Botterbusch Jewelry on the square since 1966. He has done some research on the building and is seeking other leads. Background posts: Dover’s Baughman Memorials craftsmen: ‘Sum up decades of living in a few letters and numbers’ and Wiest’s first store: ‘Segars’ 5 cents a grab and Olympic gold medalist Scott Strausbaugh another Dover product.

“Had it not been for a high school assignment, Ron Botterbusch probably wouldn’t have uncovered the history of a couple of old local buildings. But, the report was required for him to graduate. So, like his classmates at Dover Area High School, he started to research.
Two things made his project unique, however. Botterbusch chose to write about the house he lived in, and he was 43 years old at the time.”
Want to know more about Ron Botterbusch and his building? … .

The rest of this York Daily Record/Sunday News story on his building and the neighboring structure on the southwest corner of Dover’s square and Botterbusch’s research into them can be found at: Dover man learns part of long history of property on square. 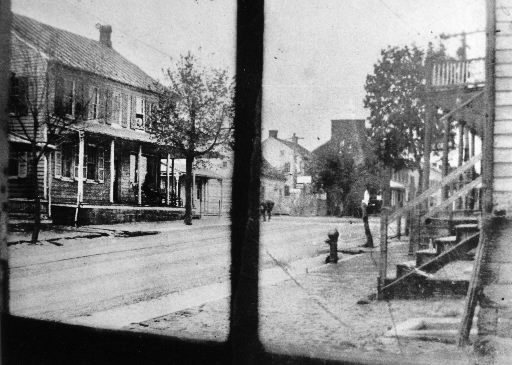 This is Dover Square in 1922. The house and window from which this was taken is the current grassy field next to the Exxon station on Dover Square, York Daily Record photographer Paul Kuehnel wrote.