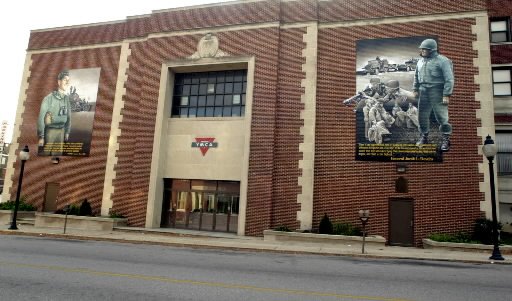 The Murals of York two-panel presentation of Jacob L. Devers.

York native Jacob L. Devers is an all-but-forgotten four-star World War II general.
That could come because he wasn’t flashy and didn’t mug for the press in the same mold as George Patton and certain other fellow generals.
But primarily his lack of prominence today comes because Ike Eisenhower did not rate him highly… .

That’s curious because Devers led two armies through the French Riveria to occupy Hitler’s left flank in France as Omar Bradley’s forces occupied his center and right a couple of months after Normandy. Further, Devers’ armies locked arms with Patton’s forces as they swept across the Rhine and southern Germany.
Now comes military historian Mark Perry, who has some good things to say about Devers. In his “Partners in Command,” Perry writes that George Marshall penned the names of generals he respected in a black book in case the day came for a second world war. George Patton’s name was in the black book. So was Mark Clark’s. And Bradley’s. And Eisenhower’s. And Devers.
Perry wrote:

“Jacob Devers was never given the credit he was due as a tough fighter and capable commander. Ambitious, with a biting delivery, he was trusted by Marshall, but Eisenhower never warmed to him. He received the commmand he coveted, as head of the Sixth Army Group, at the end of the war. He was an expert artilleryman.”

Perry’s book, which explores the relationship between Pennsylvania born Marshall and Eisenhower, later a Gettysburg resident, appears to be a good read.