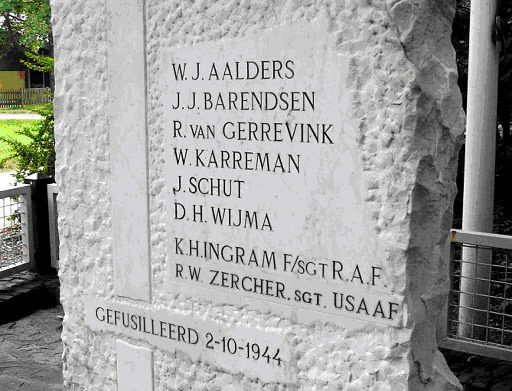 Jelle Reitsma’s research has shed much light about the captivity and execution death of Robert W. Zercher, the downed World War II airman from York County.
He wrote “The Adventures of Sergeant Bob Zercher and the other crew members of the ‘Karen B,'” relating how the Germans subsequently took Zercher’s body and displayed it publicly on the streets of Holland. They pinned the sign “terrorist” to his body.
The author read my recent column detailing additional information coming out about Sgt. Zercher after the gunner’s B-17 Flying Fortress crash landed in 1944.
He emailed back that there’s a movement in the Apeldoorn area of Holland to honor Mrs. Bitter-van der Noordaa, the woman who hid Sgt. Zercher and British fighting man Sgt. Ken Ingram in her house. Ingram and six members of the Dutch resistance also were executed.
Mrs. Bitter-van der Noordaa was arrested at the same time and deported to the concentration camp Ravensbrück in Germany, where she died Jan. 6, 1945.
“So she is the ninth victim of the betrayal of the resistance group that took care of Bob Zercher . . . ,” he wrote.

Local residents owe York countian Jim Marsteller a round of thanks for helping bring home, literally, the story of Bob Zercher.
Check out the first post in this series to see how that happened.
“I know from my research, most of the time, the story of what happened doesn’t end when they were shot down, it is only the beginning,” Marsteller, expert on the 392nd Bomb Group, said.
Also of interest:
York County historical war deaths top 1,000, York County Vietnam marker funding at half-way mark; looking for more and Neglect, racism undid all-black 24th in Korean War
Archives:
– All York Town Square posts from the start. Then use “find” function on browser to search for keywords.
– Of course, you can always search for York Town Square posts on Google. For example, when you search for yorktownsquare and York Corporation, you get this.