Billy Graham: ‘I do remember him being here and what a thrill it was’ 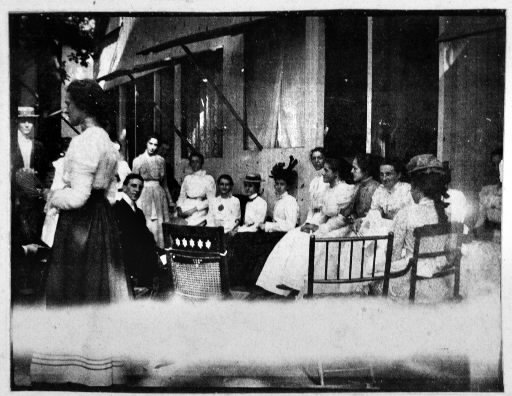 The York Gospel Center, which brought Billy Graham to York in 1940, operated Penn Grove Camp for years. There, evangelists preached in the open air, and families took an annual vacation. In this photo, campers talk outside a cabin in the early 1900s. (See additional photo below). Background posts: Retiring pastor: ‘I’ll miss the people’ and German vs. English … York churches disputed language.

The York Gospel Center was the York-area’s best known non-denominational church from about 1940 to the early 1990s.
Non-denominational meant that it was not affiliated with the predominant Protestant churches mostly with German backgrounds so apparent for decades in towns throughout York County – Methodists, Lutherans and United Churches of Christ.
As such, the Gospel Center drew attention and developed a large congregation… .

In its post-World War II heyday, the Gospel Center parallelled the growth of evangelicalism, which focused on the need for conversion to Christianity, sometimes called being born again. The growth of evangelism was fueled by the ministry of Billy Graham, development of a seminary (Fuller), establishment of a periodical (Christian Today) and organization of a coalition (National Association of Evangelicals.)
This was the umbrella under which the Gospel Center prospered for decades, providing a message and biblical emphasis different from many other local churches.
Under the Rev. Ralph Boyer’s ministry, the church became a community force. It operated its own camp, taking over Penn Grove in Smith Station, Heidelberg Township. And in 1940, it invited a young Billy Graham for his first crusade north of the Mason-Dixon Line.
A series of divisions and pastoral changes in the 1990s caused the church – long since relocated from the city to suburban York Township – to reform as Bridgeway.
A York Daily Record story (11/15/97) tells about Graham’s crusade, pegged to the release of the evangelist’s autobiography, in which he reflected on that trip to the North:

Billy Graham used to preach in trailer courts, where audiences marveled at the richness of spirit coming from a young college student.
It was the same reaction Graham drew just after college, when he came to York for a two-week revival. He was 21 then, and men and women at the York Gospel Center took to his energy quickly.
They flooded the altar when he called them. They dropped to their knees, folded their hands and fed off his electricity. They didn’t know it was Graham’s dream to be an evangelist. They didn’t know the man would eventually become world renowned.
“I do remember him being here and what a thrill it was,” said Esther Tawney, 91, of York. “Now I pray for him and the family and their staff, and every phase of their work.” Graham includes details of his York trip in his recently released autobiography, “Just As I Am.”
On page 60 of Chapter 3, Graham describes his warm reception, how he was invited to stay for an extra week, and the difficulty people had in understanding his Southern accent.
“The meetings in York went well,” the book says. “We were invited for one week, and the series was extended for a second week. In our room at the YMCA, I had to think up and pray through more messages, since I had already preached all my evangelistic sermons. There was a good response to the Gospel, even though my heavy accent made it difficult for some people to understand me. I tried speaking louder than usual, but a few still did not get what I was saying. I wanted to blame the poor communication on their spiritual deafness, but it had to have been my dialect.”
Graham’s visit to York wasn’t boldly advertised; he was relatively unknown in the north. But Orpha King of York says Graham was excited about preaching in York because it was his first time north of the Mason-Dixon Line. King met Graham in 1938, when she left York to attend the Florida Bible Institute. Her first day on campus, she sat with Graham in the campus dining room.
“He was quite striking even then,” King said. “He has a lot of charisma.”
The two became friends, even dating for a while. King joined a singing trio that accompanied Graham to the trailer courts where he preached. In her junior year, King’s minister from York Gospel Center spoke at the Florida school’s baccalaureate. Graham was impressed with the Rev. Ralph Boyer, and he asked King to be introduced.
“Do you think you could get your pastor to invite me to the York Gospel Center for the crusade?” Graham asked her. King arranged for the two to meet in the days following the baccalaureate and Graham’s graduation. Rev. Boyer extended the invitation.
That summer, Graham drove to York with his classmate and singer, Ponzi Pennington, for what would be one of his first two-week revivals. The church filled up every night. People committed themselves to Christ. King still marvels at the large group that turned out for her friend.
“He really had the blessing of the Lord on him,” she said. “The messages that he preached then, they haven’t changed much. It was wonderful the way people responded, not to him, but to the work of the Lord in his ministry.”
York residents like King were pleased to see that Graham mentioned the visit in his recent book. Some of the Gospel Center members who heard him speak those weeks so long ago, were eager to read his book anyway.
Anna Boyer, the widow of the Rev. Ralph Boyer, likes talking about her evangelist friend. She tells of the closeness she and Ralph developed with Graham, well into his popularity. Graham called the Boyers whenever he had an opening in his evangelism schedule. He occasionally came back to the Gospel Center.
Boyer remembers a particular night, when she played piano while Graham preached. Suddenly, she felt someone on the seat beside her. It was her daughter, Nancy, who decided to follow Christ that night. “He was God’s man and he’s still God’s man,” Boyer said. 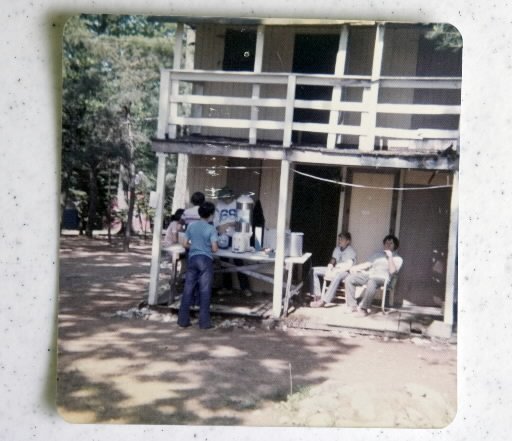