Besser’s, on the Susquehanna Trail, a favorite pitstop for motorists 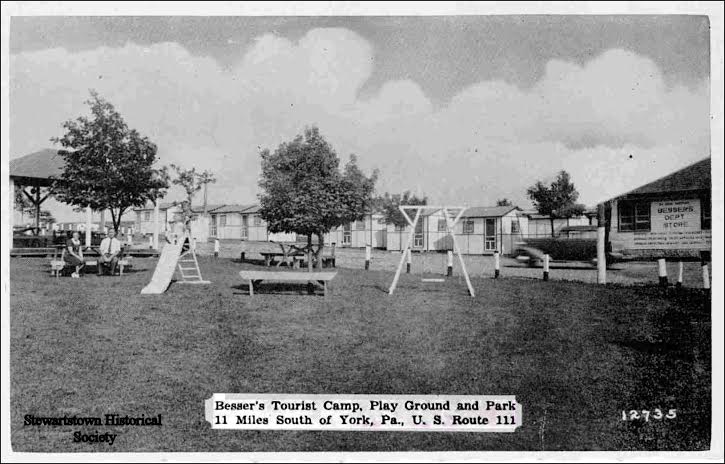 Besser’s, a major restaurant and lodging spot along the trail south of Loganville, must have been marketing minded. People have postcards showing the long-closed camp from all angles in their collections. ‘Received this postcard from a local resident,’ Doug Winemiller of Stewartstown Historical Society, wrote. ‘I have no idea of the date.’ The pitstop must have been a welcome site on the Trail – even today a rural scene – especially in a snowstorm, as we’re seeing today. The Shrewsbury Township building now sits an Besser’s former footprint. The society is sponsoring a Historic House Workshop, conducted by the University of Maryland’s Don Linebaugh, on Feb. 7 at the historical society. Ron Hershner, author of “Letters from Home,”  will be presenting a program on April 2. Also of interest: Check out these half a dozen photos about Besser’s.

Lisa Cherefko owns a table made by now-closed Boring Furniture of North York. Does anyone know Willie McLaurin Jr.? (Please comment below or contact Lisa.)

“My parents had a little drum table that sat in our living room for as long as I can remember. After they passed, the table, in pretty rough shape, came to me.

“The table has been sitting in my attic for some. I just pulled it down with the intention of painting it. After pulling it apart to clean it, I found the Boring Furniture company label on the table base as well as a label from Hoplins Furniture in Alexandria, VA.

“On the bottom of the table is a signature that, as best I can tell, reads Willie McLaurin Jr. along with what I think is a series number of 223/174. The name is unfamiliar to me and I wondered if it might be the signature of the person who made or assembled the table?”

Best of blogs: Love these details coming out in our history blogs. This one, from Stephen H. Smith, who writes about an East Berlin mill using York-made S. Morgan Smith turbines:
“The planking at the bottom of the “penstock” at the wheel was at an elevation such that the bottom of the wheel was 3” below tailwater to keep out ice. Between posts the tailpit was open on 3 sides, the rear closed by rock. The bolts or rods between the corner posts on the inside of the “penstock” could be used as a ladder to descend to the wheel to clean our brush, leaves and many times eels. It cut up the inside of the eel into sections ready for the frying pan but the hide of the eel was too tough. Dried eel hide made unmatched belt lacers and was usually used to tie the flail to the staff for threshing rye, for the straw and to tie corn shocks and sheaves of corn fodder. Sometimes the eels were so plentiful they would almost stop the wheel.”

Wanted! – History enthusiasts in Springettsbury Township. The township is looking for members to serve on the Springettsbury Historic Preservation Committee, which has part of several important preservation projects in the past few years.