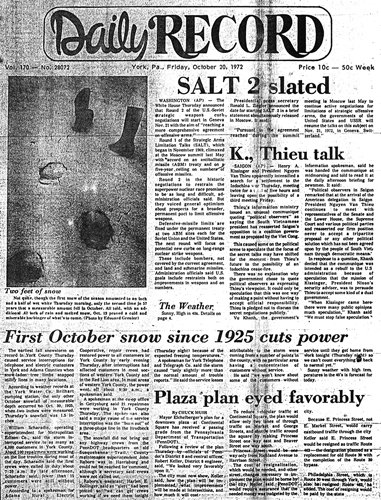 ‘Two feet of snow,’ the small headline above the photo caption on Friday, Oct. 20’s York (Pa.) Daily Record front page said. That’s two boots – or feet – in the photograph. The caption writer then owned up to the pun. ‘Not quite, though the first snow the season amounted to an inch and a half of wet white Thursday morning, only the second time in 57 years that a measurable amount fell in October. All told, with an additional .62 inch of rain and melted snow, Oct. 19 proved a cold and miserable harbinger of what’s to come.’ Also of interest: All bad weather posts from the start (and we’ve had a lot of bad weather over the years.)

Before Oct. 30’s pumpkin snow, the last late such October storm came in 1972.

And before that 1972 snowfall, the last October storm of any measureable depth came in 1925, according to news reports.

Six thousand electric customers were initially without power, but by late in the day, only 15 had not been restored.

PennDOT’s response served as an  interesting piece of the storm response that seems at odds with today.

“The snowfall did not bring out any highway crews from the PennDOT headquarters on old Susquehanna Trail,” the newspaper reported.

In fact, the superintendent appeared to treat the rare event as just another day. He was in Harrisburg, unavailable for comment.

The crews had received an alert that they might be called out that night if the roads froze.

Then again, sometimes it seems this wait-and-see strategy is deployed today.

– Part I: If onion snow comes in late spring, is it pumpkin snow in late summer? And what is onion snow?

– Check out this long list of snow, other bad weather events, from York County’s past.