Before Gettysburg, defenses against the Rebel advance stretched far into Pennsylvania 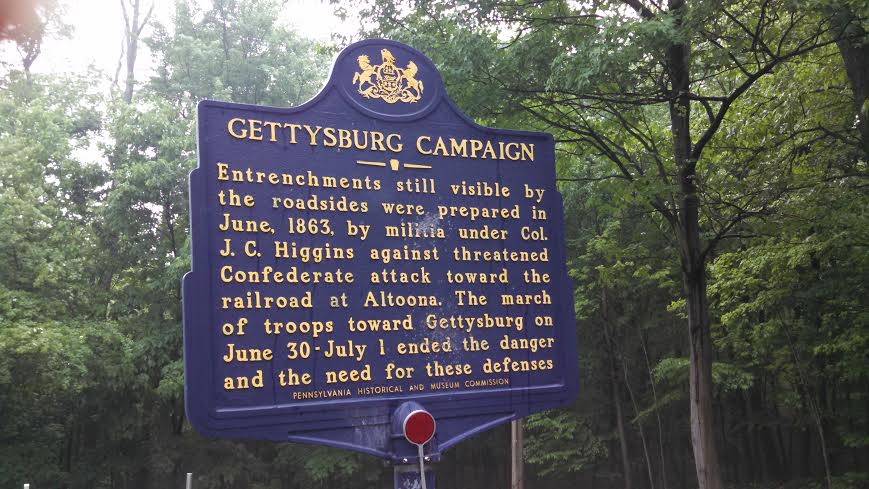 Everett, Pa., is 70 miles from Gettysburg, and add on another 10 miles to Snake Springs Gap. So this state marker in the northern Bedford County gap bearing the familiar ‘Gettysburg Campaign’ title is a long way from where the big battle took place in July 1863. This sign indicates how far the alarm of Robert E. Lee’s campaign of 1863 spread. To the east, defenses went up in Wrightsville and Columbia along the Susquehanna River, more than 40 miles from Gettysburg. And as usual when a big event occurs, York County links up. The county touched Snake Springs Gap in the mountains of western Pennsylvania, however gently. Also of interest: Check out these stories and photos from this region in the Civil War.

The photos and captions below show and tell a bit about the Union defenses in Snake Springs Gap, Bedford County. 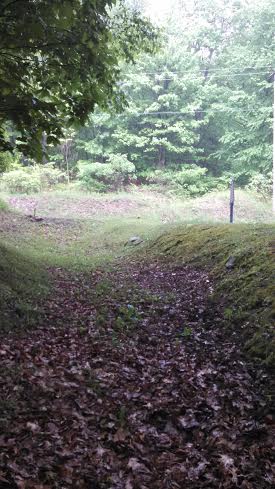 When news of Lee’s advance up the Shenandoah and Cumberland valleys reached Pennsylvania, Colonel Jacob C. Higgins oversaw the building of barricades and trenches in mountains and valleys of  Morrison’s Cove in northern Bedford County. This view looks from a trench across the Snake’s Spring Road to sister trenches on the east side. The historical marker can be seen along the road. 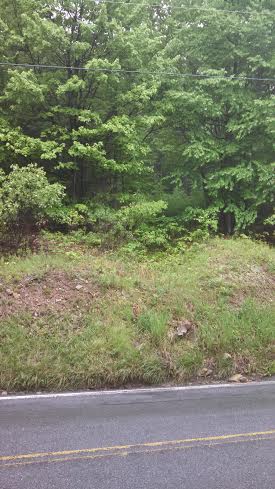 So here’s the York County connection to these entrenchments. Milton F. Burgess’ history tells about the Confederates’ routing of the Union Army under General Robert H. Milroy in Winchester: ‘General Milroy escaped with a remnant of his force, and some of his cavalry came out by way of Everett (Bloody Run) and then into the Cove where they found the forts under construction and manned by determined looking men with deer rifles. That turned Milroy’s men around, and most of them stopped there and prepared to fight.’ The 87th Pennsylvania, mainly made up of men from York and Adams counties, were among those men making it to Bloody Run. Regimental histories tell that York countians then made their way home, 100 miles west of Everett. Whether any proceeded toward the Cove is unknown, but no doubt the tales from York County men about the Confederate advance from Winchester added to concerns in the northern Bedford County area that rebel cavalry could be coming their way. 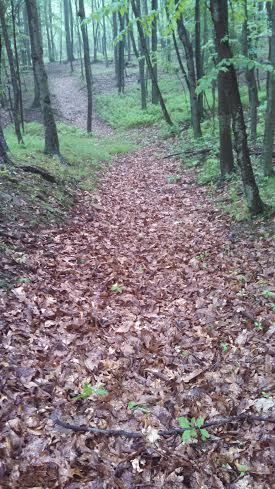 As it turned out, Confederates reached as far west as Fulton County’s McConnellsburg, where they met resistance. McConnellsburg is about 25 miles from Everett. The rebels counter marched east at Lee’s command to concentrate troops for the battle pending in Gettysburg. Any Confederate threat to northern Bedford County went away with that command. Here are the entrenchments as they appear today when the camera is pointed the other way, to the west. 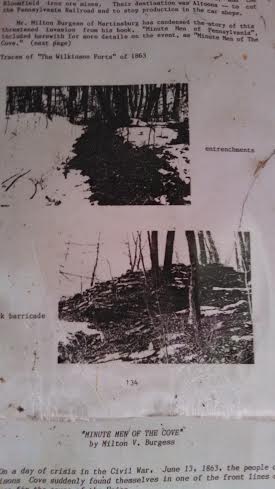 This excerpt from Milton F. Burgess’  ‘Minute Men from the Cove’ is posted in a covered kiosk near the the trenches. Ben F. Van Horn, Sr., drew on this account in compiling his comprehensive ‘Bible, Axe and Plow’, a history of the Northern Bedford County School District, a major source for this blog post. 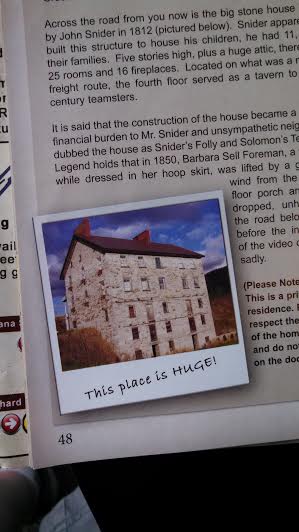 Down the mountains from the entrenchments stands this Loysburg-area house. It is – and was – a house. This photo, from Bedford County’s 2014 Visitors Guide, bears an appropriate editorial comment. The guide says the John Snider house has 25 rooms and 16 fireplaces. It’s built into a hill so the fourth floor served as a tavern, indicating that route guarded by Col. Higgins was heavily traveled. For details about this privately owned house, see ‘Bible, Axe and Plow.’

Here’s what caused all this defense activity in the mountains of northern Bedford County … .