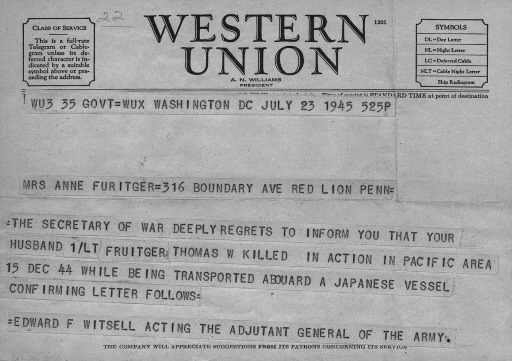 Still on the topic of World War II sacrifices by York countians in uniform:
Lt. Thomas L. Frutiger, in the Philippines with MacArthur when the Japanese invaded after Pearl Harbor, survived:

— The incessant and deadly Japanese assault.
— The grueling Bataan Death March.
— Incarceration in at least two POW camps from mid-1942 to late in 1944. The son of a Red Lion cigarmaker owed his health, in part, to his ability to roll smokes for other prisoners and guards.
— Reportedly, a friendly fire attack on the first Hell ship taking him and other Allied survivors toward slave labor in Japan.

Meanwhile, his family — Red Lion’s Anne Frutiger and their two sons, Thomas and Robert — heard or knew nothing about him for about six months… .

Vacationing in Maryland in July 1945, Anne Frutiger received a telegram.
The young family drove home, keeping a firm countenance.
As they pulled into their Red Lion garage, Anne broke down.
The car smashed into the end of the garage.
Her husband was dead.
According to available evidence, he died in January 1945, as a result of another friendly fire attack on a second Hell ship. 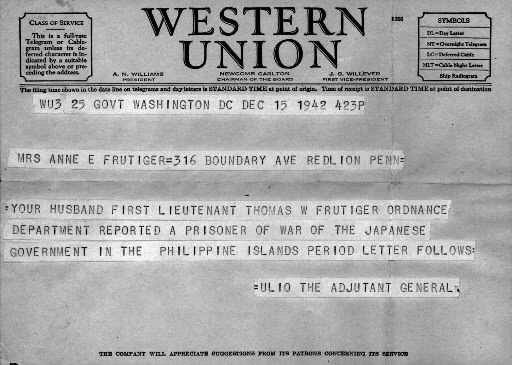 Earlier in the war, this telegram had notified Anne Frutiger that her husband was a POW.