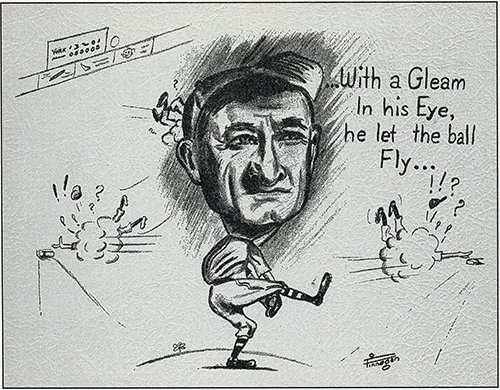 Thomas E. “Lefty” George is captured in this 1955 cartoon, appearing in Jim Hubley’s book “Off The Record.” Brooks Robinson was in York County for a cup of tea before going to the O’s, but George captivated local fans with his antics for years. (Graphic courtesy of Jim Hubley collection). Also of interest: Among recent celebrity visitors, Brooks Robinson topped them all.

Brooks Robinson was to become the most famous player ever to take the field for the York White Roses.
But Lefty George, who played into the 1950s, was the best-known during his playing days in York.
Writing about George in a column that originally ran in 1986, former York Daily Record sports editor Jim Hubley wrote about the eccentric lefthander: …

Warren (Ham) Hamilton, long-time friend and an avid baseball buff, called with a sort of request.
“Jim, do you realize that Lefty George’s 100th birthday anniversary is on August. 13?”
“No, Ham,” I flippantly shot back, “I didn’t realize that. What do you want me to do, send Lefty a card?”
Lefty died more than three decades ago, but Ham was kind enough to ignore my unnecessary and unfunny remark. He said, “I thought it would be nice if you wrote something about the man who certainly was among the most prominent and popular Yorkers of all time.”
Ham had a point. During our two-century history, York has given birth to, played host to, and adopted many individuals who developed as the result of their eccentricities, into what we know as characters, lovable, successful characters.
Such individuals leave the world richer for their presence. Lefty George was such a person, and his field of endeavor was playing the game of baseball.
Like many other successful York characters, including Mahlon Haines, the Shoe Wizard, and weightlifter Bob Hoffman, Lefty George was not a native Yorker. But like the others, Lefty found York to his liking, married a York girl, and lived the better part of his life here.
As his nickname would indicate, Thomas E. George was a left-handed pitcher, good enough to play in the major leagues. his greatest asset as a pitcher was his unusual and somewhat comical, deceptive motion to first base.
A tall, thin six-footer, Lefty would dazzle runners with that motion, which looked like a human piece of dough twisting itself into a pretzel. Before the runner could discern what it was all about, he had been picked off.
Lefty’s long career also stamped him as different from the average ballplayer: it lasted more than four decades, during which Lefty was pitching somewhere, either in professional or strong amateur leagues. He gained world-wide recognition when he pitched for the York White Roses at the age of 57 and was the starting pitcher in the New York-Pennsylvania League’s All-Star game that season of 1943.
Earlier he had his chances in the major leagues, with four different teams, in two different leagues, in four different seasons. He never had a winning record. But in the minors, he was a sensation and had four 20-game victory years, twice won 19, had five no-hitters.
Sober-minded major league executives impressed with Lefty’s pitching talents, however, could not tolerate his other irrepressible characteristic — he was a clown.
When he took the game seriously, he could pitch, but he never could resist the temptation to have some fun. In the less tolerant minor leagues, Lefty was a crowd-pleaser. He was ahead of his time.
In 1986 Lefty would have had baseball, theatrical, and book-publishing agents bombarding him with lucrative contracts.
During the mid-1920s, Lefty led the York White Roses in that era when professional baseball enjoyed its finest years here. He made York his home during the off-season and was idolized by young and old alike. His popularity spread to rival towns n the NY-PA League, and fans fondly called him “Grandpaw.” He was over 40, far past the normal age of a professional ballplayer.
One day, in Williamsport, he retaliated. He was hauled to the mound in a wheelchair, sporting a long, white artificial beard. Lefty dispatched the wheelchair to the sidelines and, much to the delight of the crowd, pitched three scoreless innings wearing the beard.
Frequently Lefty would conceal cheap, ten-cent baseballs on his person before taking the mound. Unseen, he would switch the regulation ball for the “Rocket” and deliver the latter to the stunned batter.
As were most ballplayers during those years, Lefty was a tobacco chewer. One time, in a tight pinch with a runner on third, Lefty paused to grab a chaw of plug tobacco. The alert runner noticed Lefty had his hands full and darted for home. Instinctively, Lefty threw to the catcher. The throw beat the runner but the latter was safe.
Lefty had thrown the tobacco instead of the ball.
With little doubt, Lefty George stamped himself as one of York’s better known and beloved citizens.

Also of interest:
Check out these stories and photos about the York Revolution and other York-related professional sports and sports stars.