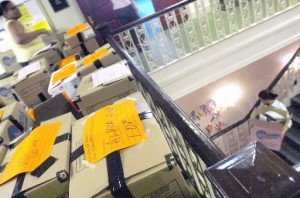 Boxes pile up around the main staircase the York City School District administration building in 2006 on Lindbergh Avenue in York. Offices on the second floor of the old school were moved, in part, because of structural problems with the building, the old Cherry Street School. The school was later renovated and is known today as the Lindbergh Education Center, an alternative school. The district has since moved its headquarters to a refurbished building on Pershing Avenue. Also of interest: Where was York County’s earliest documented airstrip?

A friend recently told me he was researching Charles Lindbergh, or at least the plane of the man who flew across the Atlantic Ocean in 1927, 85 years ago in 2012.

I asked him if he was localizing his research about the famous flier’s connections to York County.

He had not thought about that, so I started reflecting a bit about how Lindbergh’s name is linked to York County.

What immediately comes to mind is Lindbergh Avenue, often Lindberg Avenue, and its neighbor, the Lindbergh Education Center. (The late Jim Hubley, longtime York Daily Record columnist, reports that there is no record of Lindbergh ever visiting York County.)

“The former York City School District Administration Building (the Cherry Street School) did not always have an address on Lindbergh Avenue, a street running along the east side of Penn Park.
“At one time, the street was named Cherry Street. Only the section next to the park was changed to honor Charles Lindbergh after his historic 1927 flight across the Atlantic Ocean.

“If you follow the street north from College Avenue, it forms the alley behind the Post Office and continues along the King Street Parking Garages and emerges at West Market Street as Cherry Lane.

If you have other Lindbergh links, please comment below.