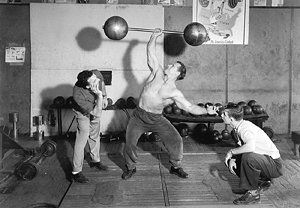 Look mom, only one hand. Legendary bodybuilder John Grimek lifts a York Barbell. Grimek scored a ninth-place finish in heavyweight competition in the 1936 Berlin Olympics.
Everytime you go into John D. Fair’s “Muscletown USA” (Penn State Press), you come out with fascinating stuff about York county weightlifting history.
It’s one of those books that keeps providing tidbits, even after you’ve read it. The book focuses around the life and times of weightlifting and bodybuilding guru Bob Hoffman and his legacy company, York Barbell.
For example:

— It details women’s emergence into weightlifting in the late 1970s. “By 1979, women, like the men, were lifting in kilos and planning a women’s world championships. Their invasion of the iron game soon sparked a debate in York magazines on the place of women in sport and society.” Former weightlifting champ John Grimek observed: “Women today no longer accept the fact that they are the ‘weaker sex.’ ”
— Female weightlifter Jan Todd, dubbed “Super Woman,” appeared on the “Tonight Show.” She completed a deadlift of 415 pounds for eight repetitions. Host Johnny Carson tried, unsuccessfully, to lift the weight. Doc Severenson joined in. Again unsuccessfully. Actor Jack Klugman added his muscle, and they got the job done.
— In the 1930s, weightlifting guru Bob Hoffman was recruiting strongmen to York County, including a veritable United Nations of backgrounds: Walter Zagurski (Lithuanian), John Terpak (Ukrainian); John Grimek (Czech) and Steve Stanko (Hungarian.)
— The celebrated Grimek connected with Hoffman in 1935. Hoffman transported Grimek to York from the national championships that year in Cincinnati. He paid for his meals and put him up in the York YMCA. Grimek was drawn to the collegial critical mass of lifters in York. “That made me want to stick and stay,” he said.

“Meticulously researched and engagingly written,” a Penn State press states, “Fair’s book will appeal to a wide range of readers, including anyone fascinated by American sports history and the iron game.”
Well said.
Photo courtesy of York County Heritage Trust