At York County’s first courthouse, there was no picnic in the pillory

Check out these new and improved stocks at the Colonial Courthouse in York, courtesy of Boy Scout Troop 20 and the York County Heritage Trust’s Facebook page. The pillory has long been a popular part of the replica along the Codorus of York County’s first courthouse. Of course, the real stocks in the original courthouse were not popular – with criminals. Sentences were stiff in those days. According to ‘Nine Months in York Town,’ crowds loved when they were in use, jeering and throwing rotten eggs at the criminals so confined. They would choke on dust kicked up by passing wagons. Courts ordered officials to cut off the ears of some criminals and nail them to the pillory. One doesn’t have to stand in – or near – this replica stocks for very long to understand that crime did not pay in the mid-1700s. There was no picnic in the pillory. One other thought: When criminals were placed side-by-side in stocks such as these, wonder what they said to each other?  Also interest: Display marks how York County’s courthouses evolved.
+++

Last week, a 14-year-old fell 30 feet off rocks in Devil’s Den at Gettysburg National Military Park. She complained of  pain.

This type of report is too common. Visitors must police themselves – and their children. Or, watch, the park service will take away this decades-long experience at Devil’s Den.

In other battlefield news, people who want to aid in monument maintenance can buy a special license plate. Check out: Gettysburg 1863. And one last thing: Gettysburg 150 meant big bucks for Gettysburg in 2013.
+++

Look out for pickers: American Pickers from TV fame are reportedly heading this way.

Be on the lookout in case they pick York County. One of the pickers (Mike, the tall guy) spoke in York a couple of years ago and made an antiquing excursion to New Oxford. 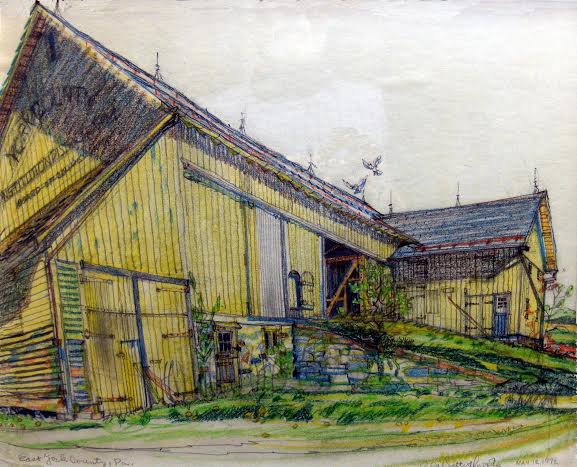 This barn was (is?) in East York near a stone house featured in a previous post. Cliff Satterthwaite captured this yellow barn, circa 1970. Anyone remember this one, believed to have been near Avalong Dairy?