At the Glen Theatre: It was standing room only on Saturday nights at Glen Rock’s moviehouse 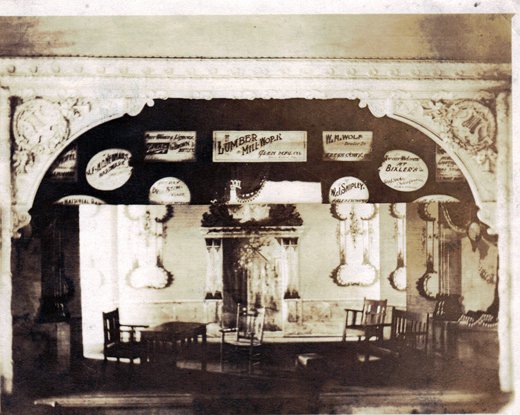 This is the distinctive look of the Glen Theatre’s stage in Glen Rock as it appeared 85 years ago. It’s set for a play circa 1925, historian John Hufnagel estimates. This photo, courtesy of Dave Seitz, captures the look of the old theater even today. It was built as a band hall – home stage for famed parade march king Roland F. Seitz – and today shows weekend movies. It’s the only old-time theater in York County outside of the City of York to still do so. And it hasn’t changed much. Also of interest: Good night in Glen Rock: Dinner and a movie and the American dream, Part I and Good night, Part II.

“Maybe it is only me,” John Hufnagel, glenrockotts@comcast.net,  wrote in an email, “but stuff like his memories is priceless.”

He was referring his correspondence with Floridian Chalmers Sechrist about Glen Rock and the Glen Theatre.

So here are Chalmers’ memories, not in quotes because I edited it lightly:

As a child in the 1930s and a teenager in the 1940s, I recall attending the movies almost every night on Tuesdays, Wednesdays, Fridays, and Saturdays. I guess it was part of my early childhood education.

Each feature movie was preceded by “Movietone News” with Lowell Thomas serving as the narrator. Then came the “short subjects” with Dick Tracey or Roy Rogers, or Gene Autry, among others. Westerns were popular. At times there was “Merry Melodies” and “Looney Toons” with cartoon characters like Bugs Bunny, Road Runner, Popeye the Sailor Man”, etc. Then came the featured movie.

Movies started at 7:00 pm, I believe, on Tues., Wed., Fri.,and Sat. – and there were two showings on Saturday nights. Admission for children was about 17 cents and 35 cents for adults.

Cars were parked on both sides of Manchester Street and that caused traffic to slow to a crawl.

The town’s law enforcement officer was Mr. Bollinger whose nickname was “Brassy”. He would come to the theatre during the movie and stand near the top of the stairs leading to the balcony. At times the young folks in the balcony would talk noisily during the movie and they would be “silenced” by Mr. Wallace Brungart who served as custodian, usher, maintenance dept., and “sergeant-at-arms”. I recall that noise was a problem in the 1930s when there were numerous CCC personnel in the balcony.

The cashier/ticket seller was Willis Rohrbaugh and the “ticket taker” was usually a GRHS student or me.

My sister “Lorie” and I served as ushers on Saturday nights when the theatre was well attended by residents from Glen Rock and the surrounding areas. On many occasions there was Standing Room Only on Saturday nights.

In my pre-teen years I opened a small candy stand in the theatre and sold candy bars for 5 cents each. Eventually my little business was replaced by a candy vending machine and a popcorn machine. Candy bars were 5 cents each and a bag of popcorn was 10 cents.

In the 1940s when I attended GRHS, my father, Chalmers Sechrist Sr., taught me how to run the projection equipment located in a fire-proof “booth” at the rear of the balcony. And at the age of 16 years I acquired a State License to operate the projectors during movies. Also, I recall helping with custodial duties during my GRHS years.

I recall that GRHS school plays were held in the theatre and that GRHS Class Day and Commencement programs were held there. And the GRHS band would rehearse there under the direction of Mr. Gottschal (?) or his successor. During the commencement exercises in May 1948, I recall speaking for about 5-10 minutes on the subject of Human Rights, because I was the class Salutatorian.

The AMF ( American Machine & Foundry) plant in Glen Rock stored heavy, metal castings in the basement of the theatre and occasionally a fork-lift truck would shuttle the castings from the theatre to the AMF plant located across the tracks from the RR station on Main Street.

My memory of the theatre history is fading. I vaguely remember that my father acquired the theatre in about 1935 and added new sound movie equipment. Prior to 1925 there were stage plays and the silent movies with piano music accompaniment. A backstage stairway led to the basement where there were several “dressing rooms” and toilets/lavatories. I surmise that musical programs were held there also.

I hope the above “memory dump” is of some interest to you. There are moments when I surprise myself with my long-term memory recall.