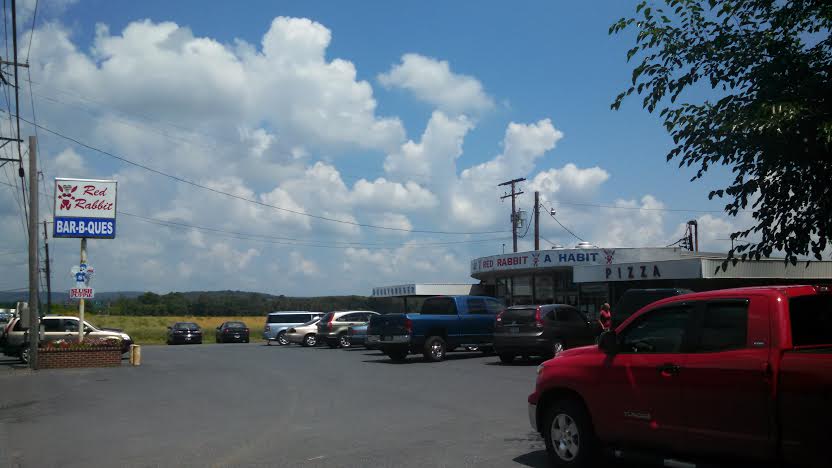 These hamburger places and their coveted recipes.

Perry County’s Red Rabbit has mysterious Bunny Dust which it sprinkles on its burgers, fries (online reviewers say ask for extra) and other menu items.

Whatever is in that dust and their “own sauce,” it makes the Bunny Burger served at the “Happy Days”-like drive-in north of Duncannon savory and delicious.

“Bunny Burgers, Fishwiches and Fries! All come seasoned with Bunny Dust! Delicious!” the 50-year-old eatery, says on its Facebook page.

+++
There’s more goodness at the Red Rabbit than its Bunny Burgers.

The eatery’s staff – sans roller skates, by the way – make it easy on first-time motorists. You quickly learn to back in. That indicates to the servers you’re looking to eat in the car instead of the picnic tables that line two sides of the drive-in.

When you’re ready to order, the waitress said, just turn on your headlights.

But what if we want to move to the picnic tables?

She’ll follow us to wherever we sit, she said.
+++
The burgers were great and not a bit messy. Someone in our car concluded Red Rabbit, serving mostly people eating behind the wheel, calculated that as an asset long ago.

But I’ll return to renew my acquaintance with the Bunny Burger.

At home, I’ll also ask for tartar sauce the next time we grill hamburgers. That seems close to the starting point for “our own” white sauce on the Bunny Burger.

But that Bunny Dust? We’ll leave that a mystery.

We don’t want to disturb those cuddly rabbits.

The Burg reports that the founders of Red Rabbit, Sam and Maggie Snyder, acquired the eatery, part of the Distelfink chain, in 1964. York/Adams residents might be familiar with Distelfink. A long-closed Distelfink, with its once beautiful sign, sits empty and unused south of Gettysburg. Perhaps enterprising people, with the energy of the Snyders in 1964, can bring that old bird to life.

Days gone by: Join in the conversation by liking, sharing or commenting: