Artist Jeff Koons came back to York for a show 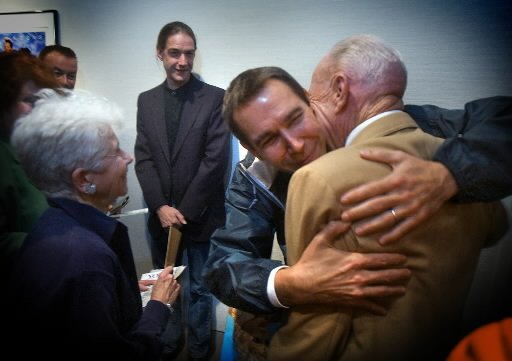 Dover native and internationally known artist Jeff Koons presented a lecture of his work at York College in 2002. That talk accompanied a display of some of his famed work. Background posts: Jeff Koons’ sculpture brings record for a living artist’s work and Dover’s/Packers’ John Kuhn: ‘He is able to grasp things very quickly’.

Some celebs with York County roots leave and never return to perform or display the fruits of their talents in their hometown.
So, it’s refreshing to see Sam Freed and David Masenheimer agreeing to perform here as part of the York Little Theatre and York Symphony Orchestra’s rendition of Stephen Sondheim’s “Follies” on March 8.
Dover’s Jeff Koons came back, too… . 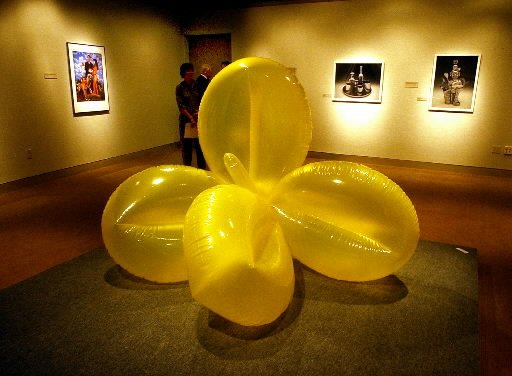 This piece of Jeff Koons’ work: ‘Inflatable Balloon Flower,’ was shown at York College in a 2002 exhibit.
Some of his work was exhibited and he lectured to a packed house at York College in 2002.
(For a wrapup of Dover area achievers see my York Sunday News column Dover home to many high achievers and a list of other links below.
Here’s the York Daily Record’s account of Jeff Koons’ 2002 lecture:

Marian Lorence snapped her fingers when she saw the giant and shiny red balloon sculpture of a dog.
Internationally famed artist Jeff Koons had just said: “I wanted to do something that my son would look back on and say, ‘He was thinking of me.'”
Lorence was one of dozens of people who couldn’t nab a seat Wednesday night in York College’s packed Music, Art and Communication Recital Hall and chose to crowd onto the steps, listening raptly as the 47-year-old York County native described his life in the public eye.
For the past eight years, Koons has fought a custody battle with his ex-wife, Italian pornography actress and politician Ilona Staller.
Lorence recalled the first time she saw “Balloon Dog” in Koons’ 1997 collection, “Celebration.”
“He misses his son,” she thought.
Lorence, who teaches art therapy at York College, seemed tuned to the real Jeff Koons, ready to be shocked by just how human the homegrown artist is.
Labeled the “Bad Boy of Art,” Koons showed a very contrary side to that contrarian reputation during his Wednesday night lecture and the opening of his first show in York County.
“It feels so special to be here, to be home,” he said. “I’m nervous because of the importance.”
He told stories about his father, an interior decorator who owned a furniture store on East Market Street. His dad influenced many of Koons’ stories – from his introduction to aesthetics through the textures and colors of fabrics to the mirrors – a fixture in his dad’s shop – that he frequently uses in his work.
He wore his heart on the sleeve of his neat, navy suit, saying his ex-wife simply couldn’t free herself from pornography, and their marriage unraveled.
He talked about his love for American history and images, the warm and fuzzy reasons behind the mass production and familiarity of his art work.
Art, he explained, sometimes puts off viewers, dictating what is beautiful and condescending what the masses’ lives should be like but aren’t.
He tried to counter aggressive art by using images and ideas that were familiar or comfortable.
“Artists in the ’80s got a bad rap as cynical,” he said. “I don’t think we were. Writers were. I think we were embracing the graceful in everything.”
He never intended to furrow anyone’s brow too deeply. If you find profundity in his work, great. If it makes you smile or laugh, also great.
For example, his well-known giant stainless steel “Rabbit” can conjure up all sorts of images – from Playboy to the Resurrection.
“That chameleon-like quality lets it survive,” he said.
Koons smiled happily when Lorence raised her hand to tell him about her trip to Bilbao, Spain. In Bilbao, she saw his giant living sculpture, “Puppy,” made from 60,000 living plants and flowering three stories high in front of the new Guggenheim Museum.
“They call it the ‘Dog House,'” she told him.
“That’s really nice and sweet,” he replied, adding that he heard many couples marry in front of “Puppy” every week.
And Koons, who shared some communal gushing over Andy Warhol, revealed his heaviest influence for the crowd.
Marcel Duchamp presented the art world with displacement, and it has been the major force of 20th century of art, Koons said. He’s been incorporating a dialog with Duchamp as well as Warhol and other pop favorites such as Jasper Johns into his work all along.
This most struck Justin Ayala, a 23-year-old program specialist at YorkArts. He loved the idea of art communicating between artists, building on one another’s ideas rather than stretching for something remote and singular.
And Ayala, also an artist, simply liked seeing how many other art lovers came out to listen to Koons and communicate with one another.
“There’s the perception that York County is closed minded,” he said, wading through a packed gallery. “It’s nice to see the turnout he received.”