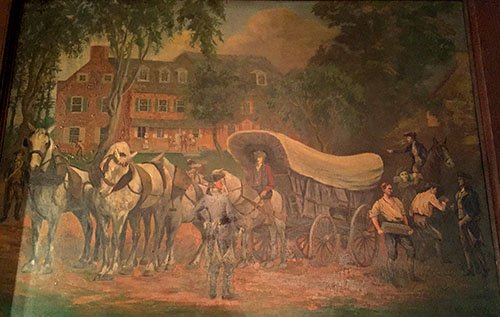 This J. Horace Rudy oil painting, presented by Derek Dilks, is dated 1924. The works of the longtime York artist of a century ago are still known – and valued – around York, Pa. Also of interest: For a series of articles on the Rudy stained glass windows at York’s First Moravian Church, check out this YorkTownSquare category.

Earlier this year, Derek Dilks sent in photos of his original Rudy painting, another example of how Rudy’s name pops up from time to time in meaningful ways around his adopted hometown of York, Pa.

It’s fitting that the Rudy name is not forgotten in a  city that is recovering – or discovering – its arts scene. As with the works of Lewis Miller, William Wagner and others, we should get to know our past masters.

Here are indications of the Rudy name in York’s memory:

– Rudy’s memory is sometimes linked – and rightly so – with his accomplished artist/son Charles Rudy. See this photo of Charles Rudy with a sculpture at the University of Pennsylvania).

– Like contemporary York artist Rob Evans, J. Horace Rudy is known for his curatorial skills. He planned the public display of these paintings as part of the 150th anniversary of the adoption of the Articles of Confederation in 1927. The panels of Revolutionary War heroes were exhibited outdoors, a forerunner of today’s Murals of York and Creativity Unleashed/Salvaged public art pieces.

So one might ask, who was J. Horace Rudy?

“Well-known in Western and Central Pennsylvania in the early 20th century for their stained glass, the Rudy Brothers originally came to Pittsburgh in 1893 at the behest of H. J. Heinz, who commissioned stained glass windows for his factory and Point Breeze neighborhood residence. In 1894, the brothers, Frank, J. Horace, Jesse and Isaiah opened a shop in the city’s East Liberty section. Their first location on Penn Avenue operated under a partnership between the Rudy’s and Valdemar F. Reich. By 1895, Reich left the stained glass business, and the brothers moved their studio to the corner of Centre and Highland Avenues.

“The Rudy Brothers experienced substantial success designing windows for churches, mausoleums and private homes. They created windows for Peabody High School, the Sarah Heinz House, Allegheny General Hospital and various churches and mausoleums, the most noteworthy of the latter being the H. J. Heinz and Bishop Canevin. In response to this demand for their work, the Rudy Brothers opened a second prosperous shop in York, Pennsylvania around 1900. The Rudy Brothers Company incorporated in 1904, and continued successfully until the Great Depression of the 1930s. The brothers took an active interest in both Pittsburgh and York’s civic lives. They encouraged artists and art clubs, as well as supported concerts and the YMCA. Horace never quite recovered from the shame of bankruptcy, and died in York in 1940. Isaiah, the youngest and only surviving brother, continued the business, which had withered into a small East Liberty repair shop, until his death in 1962. Shortly thereafter, the shop was lost to urban renewal. However, the studio not only created beautiful windows, but trained accomplished apprentices, such as Charles Connick and Lawrence Saint. Using their Pittsburgh training, both went on to work nationally in the medium of ecclesiastical stained glass.”
+++ 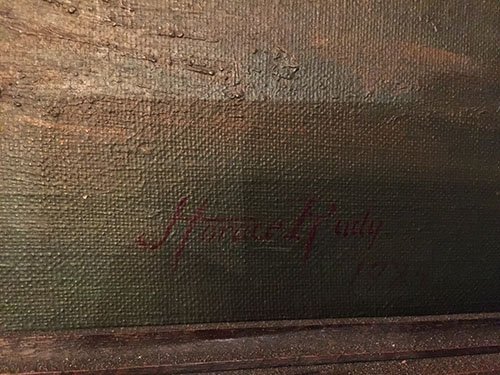