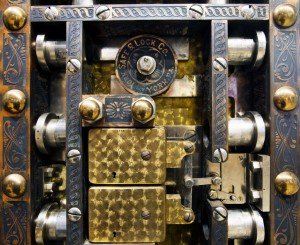 York Safe & Lock Company’s safes and vaults typified the craftsmanship of York County workers in the past – and present. This photograph, part of a ydr.com ‘Made in York’  package, combines artful workmanship in a big heavy product. This is another illustration of what promoters of York mean in touting the combination of art and craftsmanship into a ‘Creatity Unleashed’ theme.  See photographs and a video below of products made in York, as captured by York Daily Record/Sunday News photographer at  the Agricultural and Industrial Museum. Also of interest: Check out these photographs and stories about York Safe and Lock.

I feel a kinship with Evan Brandt, from our sister newsroom at the Pottstown Mercury.

Evan is a blogger, but he’s not just any blogger. His blog is akin to yorktownsquare, a combination of journalism and history and all kinds of stuff designed to help readers make sense of their community.

Some interesting examples of his work, with a history emphasis, on his “Digital Notebook” blog follow:

– Some commentary from Evan: “We ran a story about a DAR history essay contest, but didn’t have room for the essays in print, so I ran them in my blog with a link from the paper’s web site. They were pretty good essays too if you like Revolutionary-era history and considering they were written by middle schoolers.”

– Here’s one about presidential scholar Gordon Wood’s speech in Pottstown’s coverage area: Presidential timbre. (As an aside, some group in York County should ask Gordon Wood to speak. His writing is so accessible and interesting and so, apparently, are his speeches.)

So, that’s a sampling of Evan’s good stuff. Oh yes, I love the tagline on Evan’s ‘Digital Notebook’ blog: ‘All the news that doesn’t fit in print.’

Fire boxes out: Those old city fire boxes hanging around town? Well, they might be on their way out, according to city reporter Tim Stonesifer’s recent report: York city fire boxes to be extinguished? Remember the blue mailboxes? Blue mailboxes, a way of life in the past, are gone too.

Draining a popular lake: This lake is more than an hour away but York countians, who are everywhere, no doubt enjoy it. Or enjoyed it. A weak dam might spell the end of Fulton County’s Meadow Grounds Lake.

A taller Abe: The Adams County Library System is putting up a statue of Abe Lincoln in time for Gettysburg’s 150th. Abe will be larger than life: 7-foot, 6-inches tall.

More about Made in York

See Paul Kuehnel’s story ‘Made in York.’ This slide show includes a Pullman automobile customized for women – with a push-button transmission.