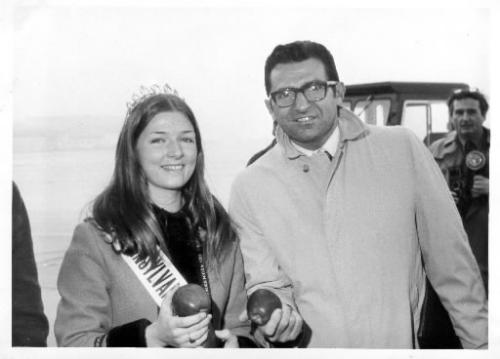 York countians have many memories of Joe Paterno, whose legacy is being remembered this week. Here, Joyce McWilliams, reigning Pennsylvania Apple Queen  sent off  Joe Paterno and his Nittany Lions from Harrisburg International Airport in December 1972 with a ‘health to you’ wish. The team was heading for a Sugar Bowl encounter against Oklahoma. McWilliams, of Windsor, submitted this photograph to the York Daily Record/Sunday News. ‘At that time I barely knew who Joe Paterno was,’ she wrote in 2008. ‘Since then all three of my sons graduated from Penn State and we are huge Penn State fans. We love going to the games and Joe Paterno is a family hero.’ Read other memories at: ‘Joe Paterno is a part of York County’s fabric.’ Also of interest: ‘Joe Paterno in York County: ‘ “I love presidents who don’t flinch” ’and ’10 top links to coverage of the life, death and legacy of Joe Paterno.’

Jeri Jones is a student of York County geology, history, geography and other pursuits ending in a “y.”

And he’s looking to add to that knowledge.

He is exploring the relationship between the Hanover Branch Railroad (after 1886 Western Maryland Railroad) and the York Iron Company mine (now P. Joseph Raab County Park).

” I know in the early going of the mine, they had their own sidling down to the Hanover Branch,” he wrote.

He found a large rail farther down the valley, and he read that the railroad installed its own siding into the mine in its later years.  He is trying to put tie these pieces together.

” Not sure if anyone can help us out with information,” he wrote. “I would like to get more information on the York Iron Company also, but that seems to be lacking in the history books.”

From press maker to high tech: Members of the rock group Live, with York roots, are investing in the old Maple Press/Bi-Comp building. That transition suggests an interesting change in York County: From printer to high-tech use, funded by a rock group.

Forum of the day: People are commenting on Edgar Allen Poe’s “Toaster” over at The Exchange.