Apple flies York County’s largest flag, but how big was its most famous banner? 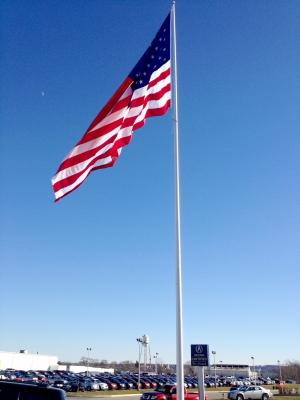 Apple Automotive Group, along Route 30 in York, is flying a large flag measuring 25 by 40 feet. A spokesman for this complex of automotive brands says its the largest American flag flying in York County. (See a drawing of a famous 19th-century York County flag below.) Also of interest: Flags of our Fathers: 11 flags are mounted for display at the Colonial Courthouse, York.

Which makes one wonder if it’s the largest ever here.

Which brings us back to York County’s most famous flag, also a large one.

It is the one that hung atop the 110-foot flag pole in York’s Centre Square when the Confederates entered York on June 28, 1863.

So Apple’s 25 by 40 feet banner is larger.  A study of that flag gives an inkling of what Confederate Gen. John B. Gordon saw that Sunday morning in 1863.

Stories vary about what happened to that flag, but it is known that Gordon’s troops pulled it down. The best understanding is that his men carried it off.

Wonder about the location of the tallest flag pole in York County today? That would be hard to pin down.

The highest? That could be one atop the 11-story Yorktowne Hotel, unless there’s one flying atop a mountain somewhere, perhaps at Roundtop Mountain Resort?

Check out this interesting ydr.com story about Apple’s large flag.

The flag that served as Francis Scott Key’s motivation to write the National Anthem, measured 30 by 42 feet. 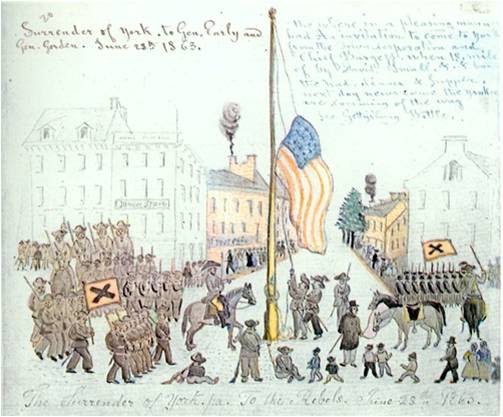 Northwestern York County flag expert: ‘I was interested in my nation’s heritage’