Anyone remember the swimming pool owned by Glady of Stewartstown? Linked in with neat York County history stuff, April 4, 2012 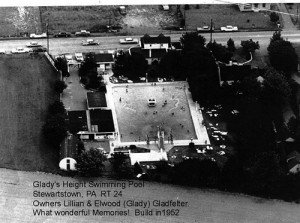 For years, the openings and closing of community pools have attracted interest. York’s Farquhar Park pool, long replaced by the Y’s Graham Aquatic Center, is one. Relatives of the owner of Glady’s Pool in Stewartstown recently put out a call for photographs of that longtime hangout. And they sent in this aerial view. Also of interest: York Township’s long-closed Springwood Park spawns memories.

“My husband is the grandson of Elwood Gladfelter. I noticed that you have
posted a picture of his swimming pool that is in the new historical book. We currently live in Arkansas and are unable to pick one up. I would like to buy one and have it shipped. Can you tell me how to do so and the cost. Also, are there any other photo’s either of the pool or the restaurant Glady owned. I would love to see them.”

She also gave some family links:

The book she was seeking is part of the ‘Yesteryears’ series, published by the Stewartstown Historical Society. 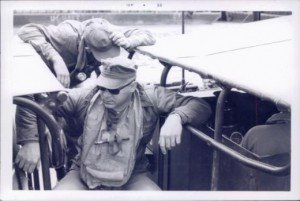 Mingus on baseball: Scott Mingus, Yorkblogger over at Cannonball, has an interest in sports as well as the Civil War. Particularly baseball, in the team of the Cleveland Indians. I am a baseball nut, as you might know,” he wrote, “and a former part-time baseball card dealer when I lived in Cleveland.” You might be interested in the linked website, which has a nice photo of an old York newspaper’s coverage of the 1919 World Series won by the Reds. Scroll all the way down to the last entry in the list.”

New bosses: Gettysburg College owns the historic Hotel Gettysburg, on the square in that historic town. I didn’t know that. Anyway, it has a new management company. Hmm, wonder if a York College/Penn State York ownership might work for the finally beleaguered Yorktowne Hotel. 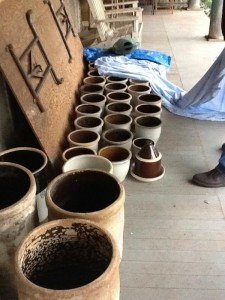 The York Daily Record/Sunday News is unabashedly campaigning for the History Channel’s American Pickers to practice their antique-hunting in York County. Here’s one candidate for Mike and Frank to tackle: the West Manchester estate of Merian and Paul Fisher. Yes, those are products of York County’s Pfaltzgraff pottery. Got other candidates? Contact: Send to producer Jodi Friedman via email at jfriedman@cineflix.com or by calling 646-493-2184.