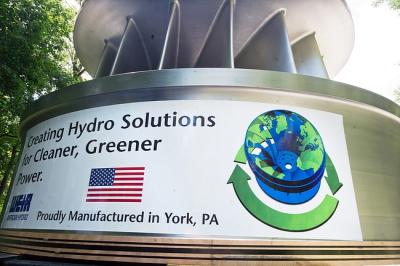 People around York County are most familiar with Voith Hydro, known as S. Morgan Smith and Allis Chalmers for years. But its sister company, American Hydro, is in the news with its crawling runner set to move through York County on its trip to Washington state. Weir American Hydro traces it roots to S. Morgan Smith, as do Voith, Precision Components and Johnson Controls, former York International, Borg-Warner et al. Also of interest: Vermont windmill: ‘That turbine was built at the S. Morgan Smith company, right here in York’.

Here’s some facts about that American Hydro-made turbine, according to Ydr.com.

– 2,073 miles the turbine runner will travel to its destination 10 states away

– 20 axles on the truck carrying the component

Background on York County-made turbines:  Read about the Voith turbine runner’s journey through York County in April and How a photograph of a creeping runner tells a 1,000 words about change in York County and How come few in York know about S. Morgan Smith anymore?

Art of industry?: Yorkblogger June Lloyd, by coincidence, writes about a member of S. Morgan Smith’s family, Stephen Etnier, who chose art over the family business.

From the archives: Old York City Hall’s transformation into a police station is in news. Someone brought up argument on FB that such renovation is good for tourism. Tourism? Who would ever visit a police station, voluntarily.”The argument for tourism being boosted is insane,” commenter responded. The YDR’s position? Renovate it, maybe 5 years from now. You just paid for a new city hall. Background: Five more things you might not know about York’s City Hall.

Forum of the day (a different twist on yesterday’s forum): Old Tyme Days in Conewago Township, with its display of antique farm equipment, concluded over the weekend: http://bit.ly/PJj9TG. What is your view of the importance of farming to York County, past or present? Please comment below. Background: Is this a York County farm truck or is it just a wagon with a motor?