Another Continental Square building in York, Pa., to go dark. When will the light come back on? 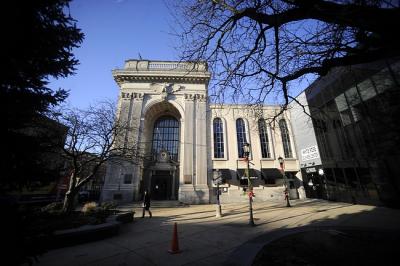 Citizens Bank is closing its landmark building, originally First National Bank, on the northeast corner of Continental Square in February. The building with the notable address of 1 North George St., is a casualty of Web banking, among other factors. A restaurant on the corner across George just went out of business earlier this year. Also of interest: To see a portrayal of what was on the northeastern corner of Continental Square before the bank took over, see M.B. Spahr.

Banks close at 5 p.m., and other uses for such buildings will light up the square after hours.

That’s certainly optimistic thinking, but one supposes the ornate building will at least remain standing, in contrast to the endangered Trinity United Methodist Church. A hole or parking lot on that site just wouldn’t work.

The building is a product of the heady days of the 1920s, when a construction boom was in play in York City and sidewalks were crowded. The Strand Theatre went up at about that time.

That’s a contrast to today when nightlife has shifted to the arts district to the west, and the square is no longer the busiest place in York County.

Indeed, York County’s “square” – where north and south meet east and west – has shifted to the Route 83/Route 30 intersection. But everyone is driving through that square, and the service industry – restaurants and convenience stores – is in full view.

It’s a metaphor for change in York County, as I outline more fully in this post.

As for the Citizens Bank Building, here are some factoids, courtesy of architectural historian’s Scott Butcher‘s “York’s Historic Architecture.”

Description: “The balustraded roof, paired and fluted pilasters and eagle ornamentation help establish the building as Beaux-Arts, thought the eagle with spread wings is also reminiscent of Egyptian Revival architecture that sometimes featured a vulture and sun disk with spread wings.”

Early occupant: That site was the home of Archibald McClean, whose house was used as the U.S. Treasury during the Continental Congress’ visit in 1777-78.

What are some uses for building if York post office moves out?