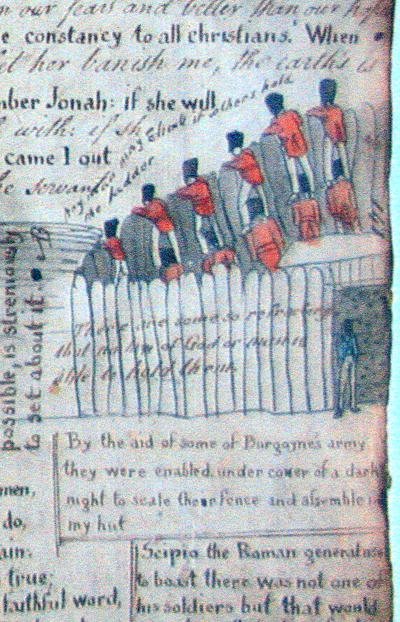 This scene of Springettsbury Township’s Camp Security is one of several drawn by British prisoner Roger Lamb incarcerated at this American Revolution POW camp. It will go on display at a public fundraising event to purchase land where the camp sat in 1781 to 1783. Camp Security is the last remaining undeveloped POW camp from the American Revolution.(See additional Lamb drawings below.) Also of interest: Researcher pulling together strands to weave story of British POW Camp Security and Revolutionary War put intense pressure of Colonial women.

One thing about history. It has its humorous moments.

One such came to light in drawings released last week by York County, Pa.’s, Friends of Camp Security.

A ydr.com story on the drawings says that Sgt. Roger Lamb, an Irishman Welsh riflemen, drew a scene (above) of his own successful escape.

For more about Sgt. Lamb’s time in York County, check out,
Friends of Camp Security’s website. Also, check out the Camp Security Facebook page.
He got out of the stockade, whose site was in today’s Springettsbury Township, by climbing on the shoulders of his fellow redcoats. Six others escaped with him, so it was a bit of a mass exodus.

Which makes you wonder why those building the POW camp didn’t consider the height of the stockade in the first place. Perhaps it shows that the camp was hastily built.

But it clearly undercuts the name Camp Security.

As for Lamb, this escape, his third after being taken prisoner at the Battle of Saratoga, N.Y., brought him out of Pennsylvania, to New York and then to Dublin.

There, he became a teacher and an author.

And his drawings ended up in Australia and photographic copies in York, Pa.

Also of interest
The public will have an opportunity to see the drawings at an event on May 20. According to the ydr.com story: “The manuscripts will be part of an exhibit that includes artifacts from the camp — buttons, coins and pottery shards unearthed during an archeological dig in 1979 — at the York Heritage Trust later this month. A private, by-invitation reception will be April 19, and the exhibit will be open to the public April 20.”

Yorkblogger June Lloyd is one of the researchers who is supplying historical support for the Friends of Camp Security. Check out her blog posts on this American Revolution POW camp.

Check out these yorktownsquare.com posts that touch in full or in part on Camp Security 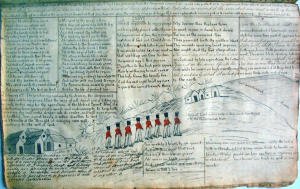