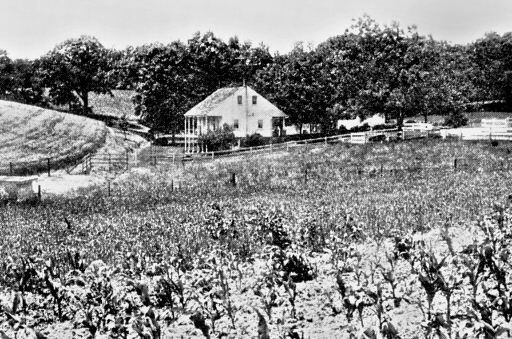 The house where John B. Gordon accepted York’s surrender in late-June 1863 stands today off Locust Lane near Farmers. This was a photograph which ran in The Gazette and Daily on the 100th anniversary of the Confederation occupation of York County. Background post: Archivist’s finding sheds light on famous note among the roses.

A newcomer to Farmers wondered whether her home played host to Confederate Gen. John B. Gordon during the Confederation raid of York County before the Battle of Gettysburg.
I wrote her back that I’ve bet on another house as the Gordon headquarters on June 27-28, 1863. It’s a still-standing house off Locust Lane, not visible from present-day Route 30. That was the location where a delegation from York consumated the town’s surrender. The next day, Gordon’s brigade and three others from Jubal Early’s divsion invaded the undefended town.
My bet is based on three factors:
— The records of Historic York, the county’s architectural experts, say so.
— That’s the lore that goes with the house.
— The house covers a cool spring.
I’ll elaborate a bit more on the latter point:

John B. Gordon’s autobiography tells about him enjoying a breakfast near a cool spring in a basement located under the kitchen of a farmhouse. The spring cooled milk contained in jugs set in its waters. Unfortunately, he didn’t locate the house.
The privately owned Locust Lane house has a spring in its basement exactly as Gordon describes. A cemented area contains the spring, which provided the house’s water supply until dry weather in the past decade.
This important part of York County’s Civil War story is not marked by a monument or sign. Here’s a vote for a preservation group to sponsor a marker telling about where Gordon met York’s fathers in their momentous decision to surrender the town.