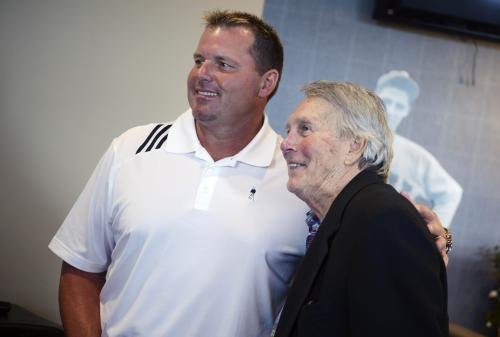 When celebrities visit York, there’s a good chance that history will remember them. Consider all the U.S. presidents who have visited York over the years. Just days ago, York County played host to Veep Joe Biden and former Major League baseball great Roger Clemens. So, yorktownsquare.com is hereby documenting these visits, which attracted much fan interest. But which to lead with on this? The picture above sealed it. It captured the visit by another celebrity, Brooks Robinson, shown with Clemens at Sovereign Bank Stadium. To me, Brooks visit was the most interesting. Brooks started his Hall of Fame career in York, playing at another stadium, Memorial Stadium. Since then, Brooks has been a fan favorite every time he returns to York and a statue of the former Baltimore Oriole stands at the stadium. His time here will be the most memorable – and enduring – of the trio. In his visit, Brooks had a comment about Clemens, as reported by the York Daily Record/Sunday News: ‘This guy is 50 years old and he still wants to pitch in the big leagues, I know that. I’ll tell you what, I predict he’ll pitch for the Astros before the end of the year.’ As for the veep, he’s not getting top billing on this post, but we’re putting up a video to balance things out (see below). Besides, he’s used to a second billing, right? Also of interest: Biden’s first visit to York brought interesting, but not always incisive, coverage from outside media.

Filmmaker Brian Plow’s documentary‘A Day in the Sun’ was unveiled at the recent Yorkfest (see trailer above.) Here’s a description of the film taken from its website:

“York, Pennsylvania has always been a place for artists. From Lewis Miller and Horace Bonham to Jeff Koons and the band, Live, creative individuals seem to spring forth from the rich environs of Pennsylvania’s Susquehanna Valley. This documentary is the story of the city as it strives to be recognized as a homestead for artists.

“One thread of the story follows the drama of the 2009 Governor’s Awards for Arts, which selected York as its host city. Due to the budget impasses and crises that plagued the State in the summer of 2009, it was called off.

“This is woven with the stories and the portraits of five artists, who at some point ventured or returned to York in search of a place to call home.”

The trailer for ‘A Day In the Sun.’

Black Rose city: Lancaster makes the most of its red rose and, of course, York, its white rose. Now and then, you hear Hanover tout its kinship with the Black Rose. In this case, it’s the oversized black rose, coming back on New Year’s Eve.

Remember: Ydr.com’s Remember oral history series brought back memories in 2010. Well, you have a chance to remember the memories with the York Fair coming around for another year.

A call for clubs to join together: York County has always been big on joining. Although membership is slipping in some, we still have dozens of associations (as they were called in the old days) across the county. So York Sunday News columnist Gordon Freireich is calling for a summit of club members to organize the organizations. Check out: Harness energy of York’s clubs