The Amish, indeed, are a growing – and welcome – presence in the region around the Norman Wood Bridge and, really, throughout the county.

This leads to the question: Why did it take so long for the Amish to cross to the Susquehanna River’s west bank in such noticeable numbers?

Putting it another way, why are there so many more Amish, Mennonite and Church of the Brethren adherents, sometimes grouped as Anabaptists, in Lancaster County than in York County?

This is a difficult one to answer because I haven’t found an authority who directly addresses this.

It’s possible that I missed this discussion in the works of Charles H. Glatfelter and Abdel Ross Wentz, who wrote much about early York County settlers and their faith groups.

Here’s the short possible answer, based on pulling together pieces of history about the Anabaptists, so named because they adhere to believers’ baptism rather than baptism of infants:

The Amish and other Anabaptist groups came to Lancaster County early, in the 1720s. So they were settled there for 10 years before most pioneers started moving into York County in countable numbers and 20 years before the village of York was founded.

An early Church of Brethren congregation, for example, formed in the York area somewhat later in 1758, and that church gathered in remote Dunkard Valley, near today’s Loganville.

Generally, evidence suggests that the Lutheran, Reformed and then Presbyterian congregations, known as Church People and descended from the “Magisterial Reformers,” arrived early west of the Susquehanna and then like attracted like from Europe.

The same grouping of Anabaptist faith groups was happening among the Amish, Mennonites and Brethren in Lancaster County.

Now, for a longer possible answer

What happened in Europe didn’t stay in Europe.

Lutherans and German Reformed congregations in Europe – and in America – also interacted with government and the military and created their own church hierarchies, such as bishops or regional grouping of churches. The Radical Reformers – the Anabaptists – thought that setup resembled the Roman Catholic Church, from which both sets of these Protestants, Radical and Magisterial Reformers, had separated in the Reformation.

These types of disagreement sometimes caused conflict in Europe.

Some of these differences might have translated into separation between York and Lancaster counties. The Anabaptists who made it across the Susquehanna into York County, who were also pacifists, formed their own settlements.

This is not to say that Anabaptists were sparse in York County. Even today – in 2010 – there are 14 Church of the Brethren congregations, according to the Association of Religion Data Archives. But there were 65 Lutheran congregations and 37 German Reformed (now United Church of Christ) churches in 2010.

Amish have been moving into southeastern York County in the past two decades, settling in Peach Bottom, Chanceford and other southeastern townships. One 2010 estimate placed the number of Amish at 450 to 720 families in York County.

There’s a telling scene to the rear of Rutter’s near Brogue in southeastern York County.

Several poles with rings stand for Amish to hitch horses while the drivers go into the convenience store.

On the ground, manure lays where the buggies are parked at their hitching posts. That animal waste is there near dumpsters that gather a far different type of garbage from the convenience storage complex. Noisy garbage trucks will empty those dumpsters and haul it away: truck horsepower vs. real horsepower.

One taller pole doesn’t bear a ring. A pay phone was mounted there for the Amish to use. It was no longer needed, replaced by cellphones.

In 20 years – with a new generation- technology has advanced in Amish country, too.

Enough Amish now call the county home that you can now track things by generations.

Every Sunday, I am answering common questions about the county religious scene, as here with the Amish, in the Retro York Facebook Group: https://www.facebook.com/groups/retroyork/. 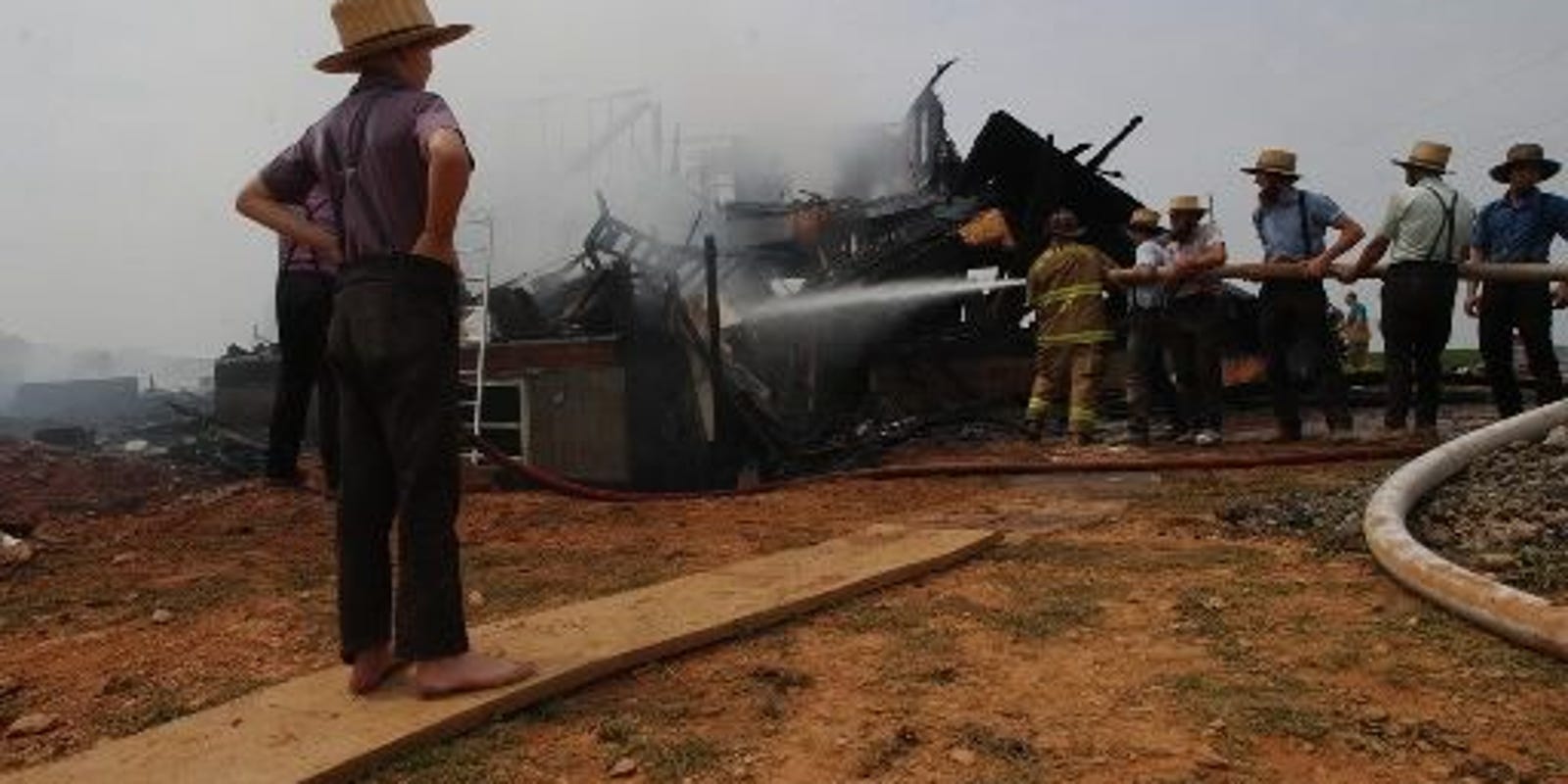 Members of the Amish community look on – and some help out – in a fire in Lower Chanceford Township in 2002. (York Daily Record file)