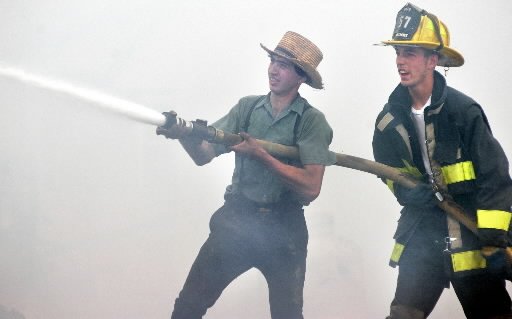 Jimmy Williams Jr., with Delta-Cardiff Fire Company, helps extinguish a fire in a burning home in Lower Chanceford Township in July 2002. Helping him is a member of the Amish community. (See additional photograph below.) Also of interest: Amish population in York County, Pa., continues growth spurt.

A fire in southeastern York County in 2002 highlighted the growing presence of Amish in York County, at least for those working at the York Daily Record.

Photos from that Lower Chanceford Township fire showed firefighters and Amishmen working side by side to put out a house fire.

The reporting showed that the Amish were coming across the Norman Wood Bridge from Lancaster County and settling near the bridgehead in that remote, southeastern section of York County.

So that sector of the county has seen immigration from Scots-Irish from Ireland and Scotland, the Welsh from Wales, and the Amish, of Pennsylvania Dutch or German heritage. Also, southeastern York County has been home to a considerable black population – evidenced by black churches and cemeteries that have dotted the countryside. Many are descendants of slaves who settled near the Mason-Dixon Line.

Another group will soon start moving in. Marylanders at Aberdeen Proving Ground and other military bases in northern Maryland are expected to move there in increasing numbers. APG is benefiting from the consolidation of military bases across the U.S.

Last count in 2010, as many as 720 members of the Amish community lived in York County, a 10 percent increase over the previous census. So there might be 1,000 Amish family members living in York County today.

This discussion about this group, which yearns for privacy, comes up because of the much-publicized TV show “Amish Mafia.” Before that, the shooting at the Amish schoolhouse in  Nickel Mines,  Chester County, shocked the nation.

As for southeastern York County’s Amish, they live quietly, evidence of their presence is seen when their buggies roll along the country roads in the Delta-Peach Bottom area.

Amishman: ‘We are making a commitment to forgive’.

Markets of Shrewsbury vendor: “Amish Mafia” doesn’t sound like any Amish she knows.

Widely circulated Amish newspaper: ‘Awhile ago Steve was up at Sam Peachey’s for some lumber’ 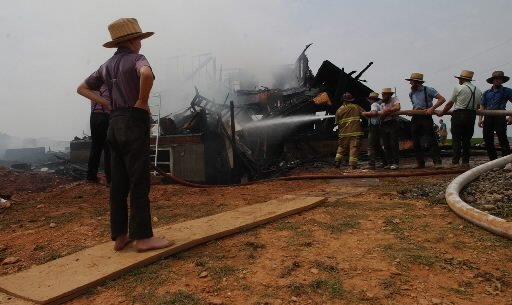 A boy watches a combined effort of trained firefighters and members of the Amish community work to put down the house fire in southeastern York County in 2002. For more on Amish, check out: More Amish moving to York County.