AMF and Harley-Davidson in York, by the numbers 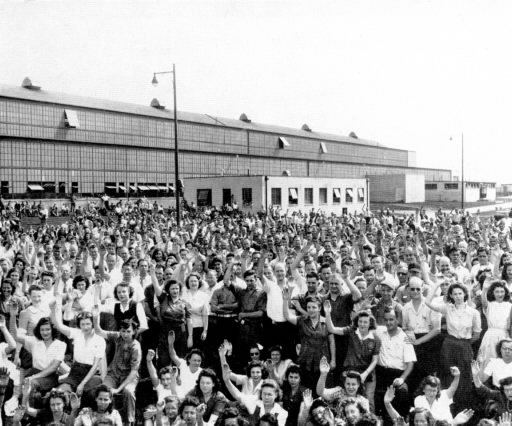 Blaw-Knox Special Ordnance Division employees mug for the camera in 1944 in a rally to raise morale – and production – during World War II. The Navy sold the Springettsbury Township plant to American Machine and Foundry in 1963. Harley-Davidson assembled motorcycles in the plant for decades before it was demolished to make way for a warehouse. Harley built and moved into a modern assembly plant next door. ‘Hog’ label linked to Harley for 80-something years and ‘Harley’s Journey a Good Ride’.

AMF – the forerunner of Harley-Davidson in York – is back in the news.
The Brunswick Corp. bowling pin manufacturing plant in Antigo Wis., is closing.
That leaves QubicaAMF in Lowville, N.Y., as the last manufacturer of bowling pins in the United States… .

AMF took over the former Naval Ordinance Plant in February 1964. AMF was familiar with York County. Some sources place its origin in Hanover, and an AMF plant operated in Glen Rock for years.
So, here are some facts about the AMF-Harley plant, by the numbers, according to a 1964 AMF brochure on file at the York County Heritage Trust:
No. of employees transfered to York with arrival of AMF: 1,000.
No. of acres on AMF’s new site: 232.
No. of structures on site: 40.
No. of square feet under roof: 645,000.
Length of tunnel that is part of Proof Range: 300 feet.
Caliber of guns that use Proof Range: 40 mm.
Original construction date of plant by York Safe and Lock: 1941.
Blaw-Knox took over plant management: 1944.
Navy takes over plant: 1946.
Peak employment, WWII: 3,650
Average employment under Navy ownership: 1,200