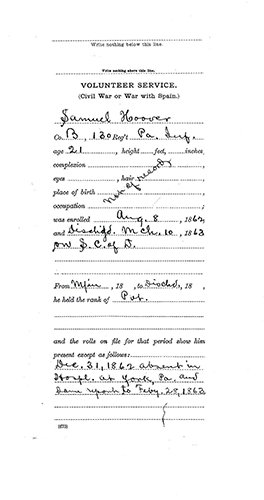 Bob Rinehart, an eighth-grade social studies teacher at Southampton Middle School in Belair, Md. And he’s a 1983 graduate of West York High School and a 1994 grad of York College of Pennsylvania. He’s a descendant of a Civil War veteran from York County, Pa., and organizer of a major event – the American Civil War Day on Saturday, May 3. So he’s Civil War through and through. This military record for that Rinehart relative, Samuel Hoover, (see below, too) comes courtesy of the National Archives. Also of interest: All Civil War posts from the start.

Bob Rinehart is one of those teachers who effectively draws from his own heritage as a rich resource for his students.

Samuel Hoover, his great-great grandfather, served with the 130th Pennsylvania at South Mountain and Antietam in 1862.

“At Antietam he was wounded and suffered from the heat,” Bob wrote in an email. “Because of the wounds, he did not take part in another battle of the Civil War. He recovered in Sharpsburg and York. He officially mustered out in early 1863, stayed in the Starview area of York County and got married.”

And the rest, as they say, is history.

“His story is what helps to inspire me as a teacher of American History,” he wrote, “and to create an American Civil War Day at our school.”

The American Civil War day is a major event, bringing in a slate of guest speakers, bands, the making of corn husk dolls and digital displays that include interviews with Civil War historians. Two speakers – Scott Mingus and Lisa Drawbaugh – are York countians.

“Keeping the history alive for young people is my number one goal. Having the event on a Saturday will allow the community to experience the work of the students and attend the presentations of the guest speakers,” he wrote.

So this event on Saturday, open to the public, should lure York County Civil War enthusiasts onto friendly soil south of the Mason-Dixon Line. 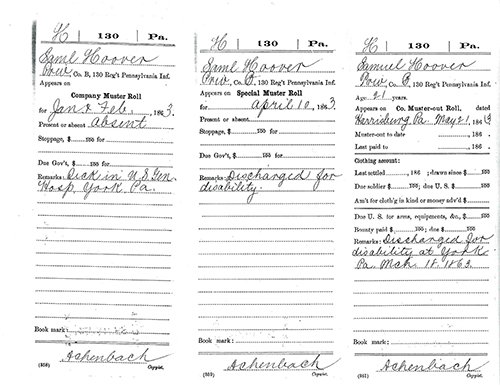 Samuel Hoover is buried in a York Haven Cemetery.

Bob Rinehart provided this American Civil War Day lineup (excerpted here) including these comments: “One of my missions as an educator is to expose the public to the wonderful and creative projects that America’s students are performing / executing. This project will remain in the minds of our students and hopefully propel them to become the next stewards of our American History – especially America’s Civil War.”

The students of Southampton Middle School are preparing the program.

Civil War quiz: Weigh in by clicking on the links!
Post by York Daily Record/Sunday News.